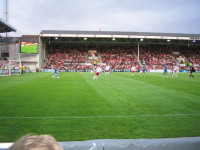 A pioneering team of international turf experts has given two Scandinavian stadiums real grass, established for the first time in the winter off-season

Johnny Trandem is a Norwegian turf grower who has turfed many of the country's stadiums. He explains that, due to the weather, Scandinavian football is played from April to November. "This means that our renovation period falls during non grass growing months when soil temperatures are often sub-zero."

"When I was asked to advise on a new stadium project at FC Fredrikstad, a premier league club about an hour from Oslo, I knew that we wouldn't be able to use Norwegian turf. The pitch was being constructed during the winter ready for the first game on the 14th April and, as a grower myself, I knew that the earliest we could harvest here would be May."

At this point the only alternative seemed to be artificial grass but, having met Stephen Fell of Lindum Turf, Trandem discussed the possibility of importing British turf with consultant agronomist Morten Eirik Engelsjord. Apart from the sheer logistics, and the risks of harvesting in one climate and laying in another, the pitch building schedule meant that the earliest the turf could be laid was 1st March, giving the sward just five weeks to establish before the first game.

Trandem and Morten Eirik considered two option - the company's 40mm thick turf, which is instantly playable, and their washed turf, which needs time to establish. In whatever form, they recommended LT6, a tried and trusted football mix of wear tolerant ryegrasses and smooth stalke 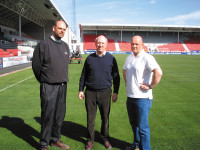 d meadow grass. "Our feeling was that, if the long range forecast for March was extreme cold, thick turf might be the only option, despite the fact that, due to its bulk, it would be costly to transport - using at least 24 truck loads over the 3-day journey.

Washed turf would be considerably lighter, less bulky, and need fewer lorry loads therefore being more cost effective to import, but would require expert handling in terms of nutritional care and attention to both the soil temperature within the stadium (FC Fredrikstad is equipped with under soil heating) and the air temperature."

In September, Trandem brought a group over from Norway to Lindum's turf nursery outside York, including three board members of the club, the pitch construction boss, and the installation team. Two months later, a group from FC Helsingborg in Sweden also visited Lindum, as they were considering a grass surface for their newly constructed pitch. Both clubs inspected, approved and reserved an area of LT6.

"We are familiar with installing washed turf football pitches in summer and having them ready for play in five weeks," said Lindum's Managing Director, Stephen Fell, "but growing-in in March, in Norway, presented an entirely different challenge. In January we decided to conduct extensive trials creating conditions as close as possible to those in the Norwegian stadium. If the long-range forecast for March was favourable we could be harvesting at the end of 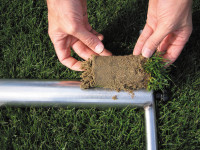 February with the turf being laid in Norway four days later."

Lindum created several large trays filling them with the same depth of rootzone specified at Fredrikstad. Heating elements were inserted and washed turf was trialed at different under-soil temperatures to see which was the most successful. "Over a five-week period we monitored root depth and mass," Stephen continues.

"We couldn't exactly replicate Norwegian conditions because Yorkshire in January is not as cold as Norway in March, but we conducted our trials against a North-facing wall to ensure that the temperature was as cold as possible. We were extremely encouraged by the results. At the beginning of February, because the long-range weather forecast did not predict severe, sub zero soil temperatures in Norway, the decision was taken to use washed turf. Following our trials we were able to provide precise instructions regarding the start up soil temperature and subsequent temperature management at the Fredrikstad Stadium."

Three weeks before harvesting Lindum's technical manager, John Stannard, began a Floratine foliar feed programme, which included products to strengthen cell walls, calcium to regulate respiration and growth promoters to encourage rooting after transplanting. After passing vigorous plant health tests, the first refrigerated lorry was loaded with 2,100 sq metres of washed LT6 sportsturf and left Yorkshire for the three day journey to Norway via Immingham and Gotenburg. One lorry per day for the following three days left Lindum for Fredrikstad. 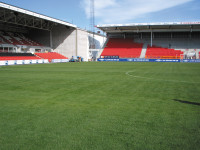 Meanwhile, in Norway, with the ground temperature at zero, Trandem and Morten Eirik had raised the under-soil heating to the required start-up temperature and applied GrowPower, an organic based, humus fertiliser to the root zone, along with mycorrizal innoculants.

The first consignment of turf arrived in Norway on the 1st March and laying commenced immediately. Covers were used to protect the new sward from the worst of the night frosts and. on the 9th March, Morten Eirik introduced a foliar feed programme with key products from Floratine's Management Action Plan 'Spring Start', augmented by Astron to promote rooting and Turgor for plant strength. "We spoon fed every week. You have to promote rooting and each roll of turf has to grow together otherwise the corners will lift up."

Ten days later, the root growth was sufficient for Morten Eirik to turn the under-soil heating down from approximately 15 to 10 degrees. 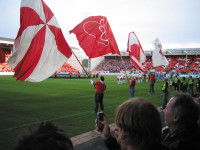 Nursed by Trandem, Morten Eirik and turf layers Sport & Grontanlegg, the new sward continued to establish and, by April 14th, the day of the first match, when Stephen Fell and John Stannard flew to Oslo to inspect the pitch, they found not only a dense sward of good colour, but roots 150 mm long, anchoring the washed turf firmly to the root zone. "Everyone at FC Fredrikstad seemed delighted," said Stephen "with the chairman of the board, Odd Hasselgaard, saying proudly that he thought it the best pitch in all Scandinavia - if not Europe! We watched the game - the home team won 3-1 against FC Lyn Oslo and, apart from two or three small divots, the pitch never moved."

Trandem admits that they were taking a chance, but knew that if they succeeded they could strike an effective blow against the use of artificial surfaces. "We were sticking our necks out a bit in recommending the washed turf route but due to the quality of turf, Lindum's experience and extensive trials, coupled with Morten Eirik's intensive nutritional programme, everything has worked as planned."

Perhaps the best recommendation stems from the fact that Trandem and Sport & Grontanlegg laid a second pitch with identical washed turf for FC Helsingborg, in Sweden, a week after they finished Fredrikstad and the results were just as good. "The inference is that we are now able to put grass down in Norway and Sweden off season," he concludes. "It constitutes a revolution in Scandinavian pitch building."