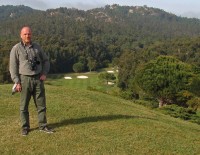 Conservation Greenkeeper of the Year 2011; what a great title, and one that I am immensely proud to have achieved here at Turton Golf Club. Caring for our environment, and implementing environmental initiatives to minimise the impact we have upon it, is always in the forefront of my mind in all aspects of my job.

However, in this article I will attempt to describe what it has meant to me, the rest of the greenkeeping team, our management and, more importantly, our members to have received this most prestigious award.

I think it may be fair to say that environmental policy is not high on the agenda for many industries, including golf, so any initiative which raises awareness is of utmost importance.

Our natural heritage and wildlife in the UK is in a delicate balance with some species declining rapidly or even disappearing altogether. The introduction, either intentionally or otherwise, of non-native species does not help matters and some can be extremely detrimental to our precious landscape - look at rhododendron for example, an invasive shrub that threatens woodland, especially in some of the ancient woods of Scotland.

That said, I believe the golf industry could play a critical role in preserving and enhancing our important habitats due to the nature of golf course design - tees, fairways and greens interspersed with rough grasslands, dune, heath, woods and other natural habitats that form the character of the course.

Three main factors were always considered when selecting initiatives to improve the course:

- Hole character, where we allowed rough to develop, for example, to enhance the challenge of the hole without adversely slowing play from errant shots 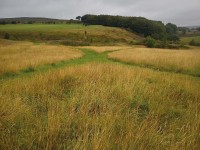 - Aesthetics, which is always important, where rough was developed to improve the look of the hole with well-defined rough edges that followed contours and features of the course.

- Ecological value. Allowing rough to develop provides an important niche for many small mammals and invertebrates, which, in turn, provide food for larger mammals and birds.

So, by improving hole character, aesthetics and ecological value, we are gradually improving our course and minimising our impact upon the environment, whilst saving manpower and fuel required to manage these spots.

Prior to receiving the award, some of the management initiatives we adopted here at Turton were small-scale, so as not to interfere with the normal day-to-day maintenance of the course and to gradually improve our golf course over a long period. 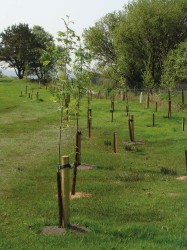 Some of them, such as heather regeneration, rough development and heath/wildflower meadow management, had remained largely unnoticed due to this. However, receiving the award has changed all that, with our members seemingly very proud that it has come to 'their' club.

Members love the one-upmanship with other local clubs and are quick to point out our achievements here. They also enjoy the fact that our name is right next to Loch Lomond Golf Club, winners of the overall category 2011. Now, most of our members welcome the environmental initiatives we employ, whilst our management are pleased to see savings in the maintenance of the course.

They are also taking an interest in how we look after the nature on our course and our ecological interests, so much so that we have now been able to make much more large-scale ecological improvements to create a much more sustainable landscape.

One such improvement is the completion of a new woodland plantation, which will be named Captain's Avenue, whereby forty large native trees - alder, birch, oak and rowan - have been planted. Each tree representing a past captain of the club and, once properly established, a plaque will be placed at each one to commemorate each captain.

All the trees are supported by over seventy smaller nurse trees, which will provide protection and a competitive element within the plantation allowing it to hopefully flourish. The plantation will also provide definition to our 13th hole as it matures due to its position all along the length of the hole. In time, the feature will alter the character and aesthetics of the hole and the trees will grow at varying rates providing a diverse habitat for woodland species. The nurse trees will also be removed and replanted on other areas of the course: true sustainable development? I think so! 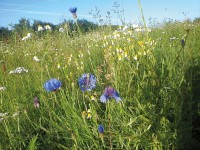 We have also been able to complete another large-scale (for us) initiative with the completion of a new 1000m2 wildflower meadow. This area will provide an attractive backdrop to our 3rd green and contains a number of native grass and wildflower species all to be found within the vicinity of the course.

Intensive grass cutting of this area during summer has now ceased, saving time and money, whilst providing a vitally important area for invertebrates, especially the declining bee population. We'll have to perform a little management during autumn to keep getting the best out of it, but that just involves strimming down the vegetation and removing the strimmed material from the site. 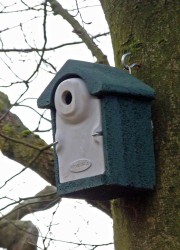 A bird nest box scheme, of sorts, has been in progress since I arrived here five years ago, with a few boxes made each winter during rainy days when we can't get on the course. These were made from any old bits of wood I had put to one side throughout the previous year.

We were slowly building the numbers of boxes up on the course, all of which were for Blue, Great and Coal Tits, but had recently pushed the boat out and built a Kestrel box. However, news of the environmental awards travels further than you might think; Martin George of CJ Wildlife, who had learned of our success, contacted me to help us with our nest box scheme by generously contributing a selection of bird boxes.

These were for a range of species, including Nuthatch and Tawny Owl, and are built from woodstone (a mixture of concrete and wood) and, so, cannot be vandalised by the local grey squirrels or woodpeckers, something that my boxes have fallen victim to. They were placed around the course just in time for National Nest Box Week, a scheme run by the British Trust for Ornithology, whereby people are encouraged to erect nestboxes to help our breeding birds.

As already mentioned, interest from our members in the ecological aspects of the course has intensified with many now asking me questions about the course's wildlife. So much so, that I now provide monthly guided nature walks around the course during summer, highlighting the important habitats and wildlife that may be seen on the course.

The walk, aptly dubbed Wainwright's Walk by the directors, has generated much interest and the first was booked up (twenty-five places) within twenty-four hours of being advertised.

The first walk, during early May 2012, was a great success, with many members commenting about how they enjoyed it and about how they didn't know about some of the rich wildlife we have here. Whilst on the walk, we witnessed Goldcrest (Europe's smallest bird), along with the first summer visiting migrant birds beginning to arrive, such as Swallow, Whitethroat and Willow Warbler. 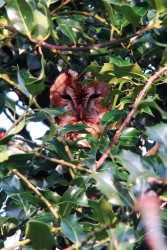 Much to the amazement of the members present, I also dissected a Tawny Owl pellet, of which a few were scattered on the woodland floor below an owl's nest. The pellet contained the indigestible remains of the prey the owls feed upon, such as fur and bones of shrews and mice and included the skull of a field mouse.

Habitats to be found on our course, and our ecological initiatives, were also discussed to inform our members of what we are trying to achieve here; a sustainable golf course that actively promotes the integration of wildlife habitats into the playing area.

The second walk, pencilled in for the end of May, was again quickly booked up and included two people from outside the club that are interested in what we are doing. Members also generously donated more than £100 on these walks which will be used to help finance some of our ecological initiatives.

To conclude, I would like to say that receiving Conservation Greenkeeper of the Year award has given me a much needed confidence boost to carry on promoting a sustainable course here at Turton. It has been quite a ride, with visits to the various sponsors, prestigious golf clubs, meeting many people in the industry and, to cap it off, a trip to Portugal to view a varied selection of golf courses.

Also, it has helped propel Turton Golf Club to a better level, and I hope it will attract new members who wish to lessen their carbon footprint upon the environment by joining us.

I also wish to thank the STRI for continually promoting the environmental awards. A thank you also goes to the sponsors, Greenkeeping, Golf Monthly, Campey Turf Care, County Turf, Everris, Syngenta and Ransomes Jacobsen who's support makes the awards possible.

A big thank you must also go to the greenkeeping team here at Turton - Chris Westwood, Aaron Gandy and Matt German - for all their efforts over the last few years, and the directors, committee and members who now form the much larger team here at Turton Golf Club.

I must also congratulate all the 2012 environmental award winners and everyone who took part this year, in particular, Dan McGrath of North Foreland Golf Club, who picked up the 2012 award. Enjoy yourself Dan; you're in for a memorable year.

Finally, a healthy environment is of the utmost importance to our well-being, and I believe that we should all try do our part, no matter how little we think that may be. At Turton we aim to further our achievements regarding the environmental awards and one of each member of the greenkeeping team will be tackling one of the categories each - turf management, waste, water and nature conservation - in the 2013 awards.

Hopefully, we will improve our performance but, more importantly, I hope that our achievements will inspire other fellow greenkeepers to follow suit and move the whole golf industry to a more sustainable level.

What the members say...

Antony Wainwright winning the Conservation Greenkeeper of the Year Award award has given the membership a much greater appreciation of the diverse ecology at Turton Golf Club. It has further instilled pride amongst the membership in their immediate environment, as well as pride in their staff. It supports the stewardship principals of course management that the club adopts.

Andy Hurst, Chairman of the Greens

The work that Antony has done, and its recognition through winning the Conservation Greenkeeper of the Year Award for 2011, has opened up a much wider appreciation and understanding of Turton's unique and characterful course to many members of the Club. Panoramic views and glorious birdsong have been taken for granted by most of us, except perhaps as an ever-present consolation when the game isn't going well; but we are realising now just how much more there is to learn and to relish about our lovely course, and how fortunate we are to have its stewardship. Golf can and does live in harmony with its surroundings, and each side of the relationship benefits as the strength of this cooperation grows.