by Laurence Gale MSc
in Local Authority
on 10 Jun 2011 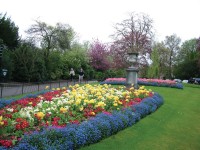 "I worry that many of the cuts seem to be centred around getting rid of front line staff, the ones that actually deliver services and have hands on knowledge and skills, whilst the fat cat middle management get reprieved"

The next few years are certainly going to be testing for many local authorities as they strive to slash their budgets to meet the Coalition Government's spending review of last October.

With many councils required to make savings in excess of 25% to meet these imposed targets, it appears that front-line services, especially the parks departments, are going to bear the brunt of these cuts, with vastly reduced budgets.

For example, in the north west, hard-hit Liverpool City Council has agreed a £6.1m cut in parks spending over the next two years. Manchester City Council plans to cut around £1.4m from its parks and 'Streetscene' budgets over the next two years in an effort to find total savings of £110m. In the Midlands, Birmingham City Council has agreed an annual parks spending cut of £180,000 until 2014, with a further £2m to be saved in the same period from a major contracts review.

Parks and gardens in the east of England are also under threat. Norfolk County Council has proposed £8.7m of cuts to its environment and transport division in 2011-12, with 108 environment posts earmarked for redundancy. This theme is country wide. Councils will be making dramatic choices on service provision, and I worry that many of the cuts seem to be centred around getting rid of front line staff, the ones that actually deliver services and have hands on knowledge and skills, whilst the fat cat middle management (the tick box brigade) get reprieved.

Prime Minister, David Cameron, is pushing for change in the way services are provided, with his 'Big Society' initiative being the catalyst for change. It is, perhaps, too early to say whether this Government will eventually succumb to a centralising agenda but, the irony is that, even if they don't, local government may still suffer a similar fate by seeing their powers given away to communities.

We are faced with schools being run by parents, parks and housing estates by residents, care homes by relatives ... and councils left doing, well, not very much!

The Government indicates that the Big Society is 'communities feeling empowered to solve problems in their neighbourhood', having the power to influence topics that matter to them, with a more 'local' approach to social action and responsibility.

My concern is how much of our parks services will be devolved into the community voluntary sector? From my experience of volunteer organisations, they are okay whilst committed individuals remain in place, however, once they leave or move out of the area, the service often ceases to function.

For me, the only way to ensure continuity of service provision is to set up a professionally run trust or organisation that can mentor volunteer activities and has the skills and relevant knowledge to manage external contractors to deliver services.

We should not undervalue the benefits parks and gardens bring to our lives. For example, holiday resorts, such as Bournemouth and Great Yarmouth, have always prided themselves on the quality of their parks, and they are a huge contributing factor why holiday makers choose them as their destination. Imagine what might happen, in just a very short time, if their appearance, and that of the holiday maker, was to decline. The affect on council revenues would be serious.