TALKING ROT! - OR A FUN GUY TO BE WITH
By John Scrace 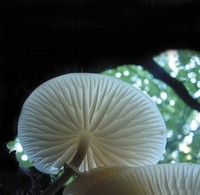 The appearance of fungal fruiting bodies on the trunk or branches of a tree often causes alarm, particularly if the tree in question is in an area frequented by the public. The fear of litigation due to injury or death caused by falling trees means that it is all too easy to reach for the chainsaw, but how often is this actually necessary? As we will see, many factors need to be taken into account before an informed decision can be reached as to the best course of action.

Firstly, remember that many of the fungi producing fruiting bodies on or around trees are of no concern, and a great number are actually beneficial. Many species (known as mycorrhizal fungi) form a close association with the roots of trees, enabling them to extract more water and nutrients from the soil than would be the case if the fungus were not present. Others are part of the natural recycling process of dead wood, freeing up nutrients for re-use by trees and other plants. Without these saprophytic fungi we would quickly disappear under a mountain of dead wood and leaves!

The fungi that can cause problems are those that colonise the roots, stem base (butt) or branches of living trees to cause decay, although the majority of these fungi can also act as harmless saprophytes on dead wood. The fruiting bodies produced by these fungi range from typical mushrooms or toadstools (technically the same thing) with a stalk and cap, to brackets projecting from the trunk and even thin, flattened encrustations on the wood or bark.

A distinction is usually made between root / butt rots, and 'top rots' that affect the upper trunk and branches. Some species of fungi, however, can cause both types of symptom. A further distinction is made between the types of decay caused by different fungi. Some cause a 'white rot' by decaying the lignin, leaving affected wood white and stringy or spongy. Others cause a 'brown rot' by selectively degrading cellulose - this results in a firmer decay with characteristic cracking across the grain. In either case, if the structural integrity of the tree is compromised, there is the potential for branches to be shed, the trunk to snap, or the whole tree to fall.

The life-cycles of many of the decay fungi are still not fully understood. In most cases it is thought that spores from the fruiting bodies infect roots, the stem base or branches through wounds. The majority of the decay fungi are incapable of infecting, through intact, healthy bark (honey fungus, described below, is an exception).

It is beyond the scope of this article to give a comprehensive description of the many species of fungi capable of causing decay in trees. Here are brief descriptions of a few of the more commonly encountered or easily recognisable species:

A common problem on beech; occasionally affects other trees. It attacks the roots, and can often cause extensive decay before any reduction in vigour (i.e. crown thinning, branch dieback) is noticed. By the time fruiting bodies are produced there is often a real risk of the tree falling. The fruiting bodies are large, overlapping brown fronds, produced at the base of the trunk or from the soil over decaying roots. They are produced from July to January, are not perennial and become black and slimy when exposed to frost. 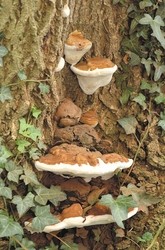 Commonly found on oak and yew. Often found causing a top rot, but can also affect the lower trunk and roots. Causes a brown rot of the heartwood, but this progresses quite slowly and it may be several years before parts of the tree become unsafe. The fruiting bodies are very characteristic brackets or fronds with wavy edges, often found in groups. They are bright yellow when first produced, eventually fading to a creamy-white. They are produced annually from May to November.

One of the most common groups of decay fungi. There are a number of species of Ganoderma affecting many different trees, particularly broadleaves. They cause a white rot, often at the base of the trunk leading to windthrow, although they can also be found higher up the trunk. Fruiting bodies take the form of shelf- or hoof-like brackets, often brown above and whitish below. They are perennial, can be very hard, and increase in size over several years, sometimes reaching up to two feet in diameter. It can take many years for affected trees to become unsafe.

Probably the most well-known decay fungus, it also has the widest host range, killing not just trees but many other woody plants. The term 'honey fungus' covers a number of species of Armillaria, with some more aggressive than others. Armillaria mellea and Armillaria ostoyae are the most damaging.

Honey fungus causes a white rot and principally affects the roots, but it can also spread into the stem base in the later stages of attack. A white sheet of fungal growth below the bark of decaying roots or stem bases is the most diagnostic feature of this disease.

Fruiting bodies are produced in the autumn and are brown mushrooms with a whitish collar on the stalk just below the cap. However, honey fungus differs from the other decay fungi in that the spores produced by the mushrooms do not play a major role in the spread of the disease. Instead, the fungus spreads through the ground by means of black, string-like structures called bootlaces or rhizomorphs. These can grow several metres in length and can colonise the roots of an adjacent plant if they come into contact with them. Unlike other decay fungi, honey fungus is also perfectly capable of penetrating healthy bark - no wounds have to present.

Further information on these and the many other decay fungi can be found in the books 'Diagnosis of Ill-Health in Trees' and 'Principles of Tree Hazard Assessment and Management', both published by The Stationery Office. Some very good photographs of the fruiting bodies of a range of decay fungi can be viewed on the website of the Arboricultural Information Exchange at www.aie.org.uk/index.html - follow the link for tree fungi pictures. 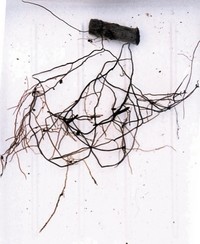 Anybody with trees in their care should inspect them regularly, particularly where there could be a liability if injury occurs. A trained arboriculturalist could be employed to do this, but a simple assessment can often be done yourself, with an expert called in if you have any cause for concern.

The assessment should involve checking the condition of the crown of the tree - if this is done annually it should be noticeable if there is any thinning due to twig or branch dieback, or a reduction in leaf size. Particular attention should also be paid to any trees which are slow to leaf out in the spring, or which shed their leaves earlier in the autumn than neighbouring trees of the same species. Check the trunk and branches for any evidence of bark death, weeping sap or splitting, and for the presence of fungal fruiting bodies. Also make sure that there is no evidence of roots starting to lift, or trees beginning to lean.

If you have any worries at all it is always best to call in an experienced arboriculturalist (information on suitably qualified consultants in your area can be obtained from The Arboricultural Association, tel. no. 01794 368717). They will then make an assessment of the risk, using a range of techniques. The first will be a visual assessment of the tree, similar to that described above but more detailed and with expert interpretation. If a decay fungus is present they should be able to identify it and assess its significance on that particular tree species. 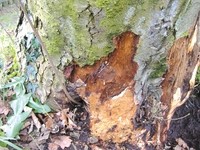 If the fungus is deemed to be of concern an assessment will then be made of the extent and position of any decay within the tree. This can be done using a number of pieces of 'kit'. They vary from striking the trunk with a mallet to check the resonance of the wood, through drilling into the tree to take cores or to check the wood's resistance, to very expensive pieces of sonic equipment that produce a coloured computer image of potential sites of decay.

Of course, the expertise lies in the interpretation of the results of any of these tests - a mallet in very experienced hands can give results as reliable as those from a sonic tomograph used by someone lacking experience. It is only possible to be sure of the true extent of decay if a tree is examined after felling.

This is the area where the consultants really earn their corn. Having assessed the threat to the tree they must then formulate a plan of action. This could range from felling the tree to doing nothing, with any number of possibilities in between.

The action taken will depend on many factors, including the species of fungus, the species of tree; its location, size, shape and age, and the extent and characteristics of the decay. A good arboriculturalist will have the confidence to leave a tree in situ whenever possible, with felling used as a last resort. In many cases the decay will not be extensive enough to constitute a risk, or will be progressing so slowly that further periodic monitoring is the best option.

Even when the decay is extensive this does not always mean that the tree is unsafe. Several of our most significant, ancient trees, for example, have completely hollow stems due to their heartwood having been rotted away, but are still structurally sound. In effect they have become hollow cylinders, an inherently strong structure. It has also been shown that older trees with thinning crowns may be less likely to be blown over by strong winds than vigorous younger trees, with thick canopies that act like sails in the wind.

Other actions that may be taken include branch removal to reduce the size of the crown, compensating for the loss of roots or the reduction of strength in the trunk. Some trees can be supported by props or cables. Where top rots occur, reducing the length of affected branches may be all that is required rather than their complete removal. If a tree suffering from decay is particularly valuable, it may be more sensible to remove the factor that makes it a risk to the public (e.g. diverting a path that runs underneath) than to remove the tree.

Of course there are many other factors that can result in reduced vigour, dieback and crown thinning. These include drought, waterlogging, soil compaction and the effects of other pests and diseases, and should all be taken into account during the examination conducted by the arboriculturalist. As we have seen, though, if decay fungi are found to be involved it does not automatically mean the end of a tree's useful life. Even if a tree has died, leaving it in situ will provide a valuable wildlife habitat for invertebrates, birds and small mammals if it is not deemed to be a risk.