by Nick Reid
in Football and Synthetics
on 29 Apr 2016

Lambs fans of all ages are being encouraged to take a small piece of history home with them, as plans to lay a state-of-the-art 3G pitch become a reality 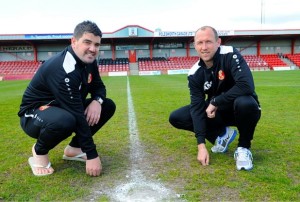 Fans of Tamworth FC are being urged to come forward and dig up their own piece of the pitch to keep as a memento, before the new artificial pitch is installed at the ground this summer.

The club will be holding a special open day in May to allow fans to come down and claim their bit of history for a small donation.

George Delves, general manager of Tamworth FC, said: "It is a shame in some ways that we are losing the grass pitch, but the change will make us self-sufficient and we can use it 365 days a year, rather than just 21 Saturdays a year.

"It is about making the ground part of the community, so that people can use the pitch all year round.

"Penalty spots and corner segments are priced at £50 and £25 respectively, while the rest of the pitch is available on a 'pay what you choose' basis in the form of a donation to the club.

"We are expecting quite a few people to come out and show their support for the club on the day.

"It's a chance to give something back to the fans so they can keep a small memento of the club and put it in their gardens or other patches of land."

The club will open its doors to fans on Friday, May 6, between 8am and 8pm.

Football fans will then get the chance to dig up a small section of the pitch which they can keep or lay in their own gardens so they have a small piece of The Lamb with them all the time.

Work on laying the 3G pitch will start in the next few weeks and will take between eight and ten weeks to complete.

Mike Lee, who has been a groundsman at the club for more than 25 years, was recently presented with a trophy for his years' service.

He spoke to the Herald about the changes.

He said: "It was really nice to be given the trophy and it was something I really didn't expect to get.

"It will be a shame to lose the grass pitch but it is for the future of the club.

"It will still need sweeping every ten hours or so to keep it in prime condition, so I am looking forward to that keeping me busy."

For the original article, visit www.tamworthherald.co.uk.