0 Taylor Made for Brian

Sandiway Golf Club was founded in 1921 on 115 acres of land leased from the Delamere Estate in Northwich, Cheshire. Ted Ray, assisted by Sidney Collins, who was the first club professional, constructed the course. The original layout was 6038 yards off the medal tees but, in 1925, the golf course architect, Harry Colt, made improvements that resulted in an increased yardage to 6179.

The course remained unaltered for thirty years, until the early fifties, when the route of the Northwich by-pass meant the loss of holes 2 and 3. This led to the leasing of 49 acres from I.C.I. to build new 2nd, 3rd & 4th holes - the old 4th being used as a temporary.

Since then, changes to the layout have increased the yardage to 6404, par70, covering approximately 155 acres of land.

The course was developed on heathland with copses of mature birch and a scattering of oaks. Over the years the woodlands have increased in density. The soil was described as "sour and sandy" which favoured the growth of fine turf.

The greens are of the original push-up construction. The grass species composition is, approximately, 40% bent and 60% annual meadow-grass. Fairways comprise traditional bents and fescues.

The course is managed by Brian Taylor who came to Sandiway in 2004 from Peterborough Milton Golf Club in Cambridgeshire. Brian employs a staff of six. His deputy course manager is Andrew Simms who has been at the club for twenty-two years. First assistant is Paul Farrelly (7 years), Greenkeepers are David Gillett (5), Matty Johnson (5) and new recruits Matthew Johnson and James Dennett who joined in late summer.

In the short time Brian has been at the club he has brought a number of changes to working practices, ensuring the staff are adequately trained and certificated for work they undertake. He is keen on having a good networking relationship with other local golf courses and is a member of the Gingerbread Men, a core group of like minded greenkeepers who meet up regularly to share ideas and experiences.

Brian and Andy are trained as workplace assessors, allowing them to give plenty of support and feedback to the staff. Brian has also implemented a multi-task culture, enabling a more flexible approach to daily tasks

Attracting and maintaining members is an important issue, so it is vital that the club can offer year round golf as one of its attractions. In addition, Brian is improving the quality of the playing surfaces.

Maintenance regime
Greens and tees are hand mown using Toro equipment. Details are given in Table 1 above.
Whitemoss 80/20 sand/green waste topdressing is applied to the greens, about eight times a year, using 8-10 tonnes per application across all eighteen greens. Tees are dressed twice a year with Whitemoss 60/40 sand/compost dressing. 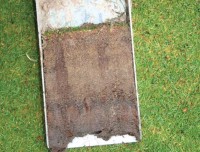 Feeding of the greens has been reduced in the last two years. In 2007 a total of 80kg of nitrogen per hectare was applied and, 2008, just 27kg per hectare.

Brian began the year by applying a Scotts mini granular 4:0:4+4% Fe. TAll the other feeds are liquids. A seaweed extract supplied by Farmura is applied twice a year along with some sulphate of iron during the winter to maintain colour.

Holes are change weekly, with each green having a spare hole cut which can be utilised at weekends. Bunkers are raked daily,

The greens renovation programme was completed in one week during the latter part of August when weather conditions and soil temperatures were favourable. The following work was carried out:
• Verti-cut greens to remove small mount of thatch and raise lateral growth
• Deep aeration using the vertidrain to a depth of nine inches with a small amount of heave
• Micro-tining of greens 7, 13 and 16. This removed small cores of surface thatch which was then replaced with topdressing and seed
• Solid tining of all greens to a depth of four inches
• Drilling in of bent seed
• Star slitting and brushing of all greens
• Bent and fescue seed broadcast on the surface of the greens and worked into the holes
• Topdressing applied to all greens
• All greens vibro-rolled to restore surface levels
• All greens brushed to work in dressing

Alistair Beggs from the STRI conducts an annual inspection of the course. He walks the course with Brian and his staff and members of the committee. This gives everyone the opportunity to communicate issues and concerns. The 2008 report was very favourable, highlighting a number of achievements:
• An increases in bents populations in greens across the site, with particular success and progress at the 1st, 2nd and 3rd
• The general cover of grass across the greens is good, with little or no active disease
• The programme of work initiated each August over the past few years has been highly productive in terms of improving profile conditions beneath greens and introducing new seed. The timing is not a coincidence. August is a time when soils are receptive to treatment and warm enough to germinate and establish seed optimally
• Much good tree management work has been achieved, particularly around the 2nd, 3rd and 10th greens
• Root trenches have been introduced at the 9th and 11th greens with good results

Brian has seen improvements to the greens surrounds at the 9th and 11th after the trenches were installed. Surface roots were affecting the grass growth. To prevent the roots from causing more damage, a root trench was installed around the back of each green. A 300mm deep trench was excavated, then a lining of plastic was put down and backfilled with stone. A rootzone was placed on the top 50mm and oversown. The plastic liner creates a physical barrier to prevent tree roots growing back into the surrounds.

Winter work
This winter's work will be centred around further tree work, with the aim of increasing air flow around greens and tees, as well as promoting better ecological and environmental benefits for the flora and fauna. This includes thinning, crown raising and, where required, removal in accordance with the appropriate licences.

New trees and shrubs will be planted, not just on the course but in areas around the clubhouse, car park and pro shop.

Much of the tree debris, such as trunks from silver birch, are reused to form path edges or to construct composting bays around the course to store grass cuttings. Log piles are constructed to encourage insect and wildlife havens.

The routine work will include the usual mowing as necessary, bunker raking, hole changing, divoting, leaf blowing and switching. Turf conditioners will be applied to greens, tees and approaches, with fungicide to greens, as necessary. Worm control will be carried out on tees, fairways, approaches and greens

Levelling work is being carried out to the men's 5th and ladies 2nd tees and a new visitors tee at the 8th has been constructed. Work continues on improving the existing path ends using turf, rubber crumb and plastic block.

Some turfing around bunkers has been completed, and a couple of sunken areashave been re-levelled.
The course was suffering considerable damage from rabbits coming in from adjacent land. The only real solution was to erect rabbit proof fencing but, with over 3,000 linear metres required, it was a considerable outlay of £30,000. However, after much deliberation, it was felt the benefits to the club would justify the cost.

The club hired a contractor to undertake the work, and damage is now confined to some localised areas, caused by a small population that lives within the course boundaries. These are being controlled with an ongoing culling programme. The fence is expected to last in the region of ten years, but will require regular attention - one more task to add to Brian's list!

Sandiway Golf Club appears to be in good hands. Brian has a dedicated team of staff who continue to take on the challenges of maintaining the course in a sustainable and cost effective way, particularly important in the present financial climate.