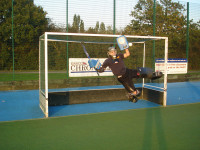 Synthetic maintenance specialists Technical Surfaces were recently asked to provide the maintenance programme to an all-weather sports pitch in the village of Leadenham, Lincolnshire.

The facility had just been officially opened and the parish council wanted to be certain that the surface would be kept to high standards at all times. They were keen that the correct characteristics of the surface be preserved for as long as possible, and to this effect they had the foresight to sign a three-year contract with Technical Surfaces for the continued maintenance of the facility.

The introduction and preservation of the sports facility at Leadenham has proved to be of real benefit to one local resident in particular. 14 year old David Overton had long wanted to be able to practice hockey, but the absence of local facilities made this very difficult.

A keen goalkeeper for Beeston Hockey Club, David was thrilled when the construction of the sand-dressed kick-about surface in his village allowed him to train as many times a week as possible.

Months of continued preparation at the village facility has paid dividends for David, and he has gone from strength to strength. From playing with his local team, David progressed to make both the County and the East of England teams, before being picked for England U16 trials this year. Following the trials he was then selected to play in the England U16 squad for the Home Nations Tournament, which took place last year.

David has now been selected for the Olympic 2012 development squad, and there is no doubt that the existence of the all-weather surface at Leadenham, and its continued maintenance by Technical Surfaces, has gone a long way towards improving this particular youngster's game.