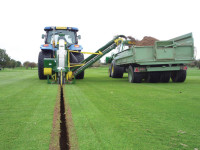 With these words in mind, let us consider the removal of excess soil water from turf used for sport. Unless the site is a free-draining one, some form of pipework will be necessary to carry the water away. But, what size? At what depth? What trench width and trench spacing? Some would say 'the bigger the better', others would say 'not so'. Is there a right way?

To answer this question, let us think of an established football or rugby pitch on an area 100m x 50m. We need to think back over thirty years to how, in the 1970s, these pitches would have been drained. Big, powerful, self-propelled agricultural drainage machines on tracks would have dug wide trenches and placed the excavated soil at the side of the trench to be cleared up later in the operation. Upheaval was substantial, and it was usual to allow twelve months before re-use.

Also popular at that time were small self-propelled chain trenchers, which cut trenches over 100mm wide, similarly depositing the arisings on the trench side. They made less damage to the playing surface but, nevertheless, reinstatement was measured in months. 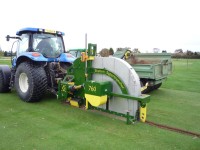 Whichever method was used, it resulted in wide trenches and soil contaminated turf.

The big advances in sportsturf drainage started in the early 1980s with the advent of the 3-point linkage, tractor mounted, wheel trencher.

The high speed cutting disc cut clean trenches 50mm wide, which acted like mini-ditches. These machines, initially, were used in agriculture, but those involved in draining sportsfields soon saw the advantages for draining fine turf. The next development was an enclosed trencher with a conveyor to load the excavated soil into a trailer running alongside; this machine was further developed to cut trenches from 25-140mm wide.

At a stroke, it became possible, easily and speedily, to vary the trench width to suit differing circumstances. Much thought was given as to what should be the optimum width and optimum pipe size. In Great Britain, a technical panel was set-up by the Land Drainage Contractors Association (LDCA) to study the implications of the latest developments in machinery.

It has been shown, time and time again, that the most cost-effective system is one using the smaller diameter land drainage pipes fitting snugly in trenches, filled to the surface with free draining aggregates. 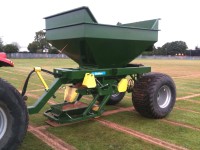 It should be remembered that, when excess soil water enters the land drainage pipe, very small particles of soil enter also. When there is a good flow of water through the pipe, these 'fines' are carried along and eventually exit the system. However, if too big a pipe is used, water flow through it is sluggish and the 'fines' settle out; they slowly build-up, constricting the pipe size and, consequently, its effectiveness.

Hence, using unduly large pipe is a waste of money. Not only does the pipe cost more, but it also means digging a wide trench which, in turn, leads to substantially more free-draining back filling aggregates.

Notes: Trenches need to be dug a little wider than the diameter of the pipe, for they become narrower soon after being dug due to the latent forces in the ground.

The excavated soil has to be carted away. In the loose, it is approximately 50% more bulky.

Normally, two different backfilling aggregates will be specified, so two passes with machinery will be required.

Let us return to the football or rugby pitch occupying an area 100m x 50m.

Assume 25mm of rain falls on it in an hour. Assume the soil is close to field capacity and can only absorb 25,000 litres. The drainage scheme has to cope with 100,000 litres of water. The use to which the pitch is put will normally determine the spacings of the drains - a first division pitch will need speedier drainage than that used by an infants school. In either case, 60mm pipes are to be used running across the pitch. At 10m intervals there will be eleven runs, each run will have to evacuate 9,090 litres of water.

At 5m intervals, there will be 21 runs. Consequently, each run will have to evacuate 4,700 litres of water.

The types of aggregate used have a bearing on the speed with which the excess soil water reaches the pipes. Round aggregates drain more quickly than crushed aggregates, for there is considerably more pore space.

The depth of the land drains wants to be such that 400mm of the topsoil is not saturated. Installing drains too deep can lower the water table to such an extent irrigation becomes necessary sooner.

We now have advanced specialist machinery for draining sportsfields. The optimum width of trench can be dug precisely. The elevators on the trenchers convey the excavated soil into tractors or dumpers; the sward is left clean.

Reinstatement of the narrow trenches can be by seeding or turfing. It is now possible to drain today and play tomorrow. Best of all, this greater efficiency has resulted in lower costs. Hats off to the engineers and management consultants!

The British firm lead the industry when it comes to successful drainage techniques and machinery, and are well known in the UK and Europe for their high quality, robust machines. The past 12 months has seen the business expand into Australia and New Zealand and they are keen to build on their initial success.