Royal St George's Golf Club has trusted in Toro since 2013. First came a fleet deal and then last year a new irrigation system was installed making it a Toro Total Solutions customer in time for the club to host the Open Championship for the 15th time. 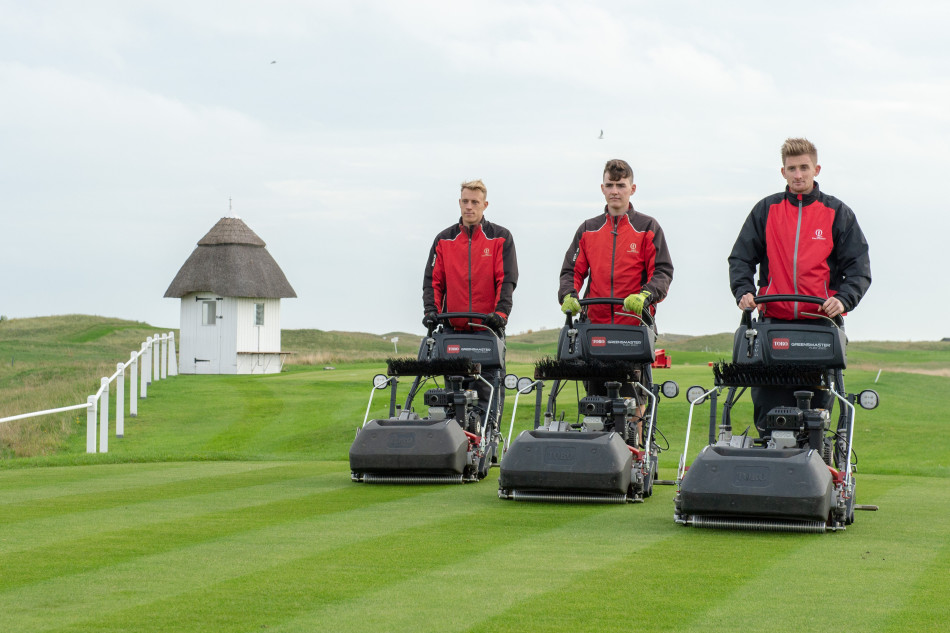 Royal St George's opted for seven Greensmaster Flex 2120s to help bring improvement to the greens, some of which can be seen in action here

Consistently ranked among the best golf courses in the world, Royal St George's decision to opt for Toro machinery yet again for another five years was in large part down to its technological advances and product development.

In 2013 it was the very latest in green technology in the shape of four TriFlex Hybrid 3420 riding greensmowers with electric reel cutting units which particularly appealed to course manager Paul Larsen. This time it's seven Greensmaster Flex 2120 walk-behind mowers delivering the ultimate finish.

"All the machines we chose last time have been so effective we've pretty much gone for the same again for our second five-year agreement," says Paul. "In the demos, the Toro machines just did a better job on the course than everything else, and since we've had them they've proved their quality too. Five years later, the machinery from our first fleet is still as good as we wanted it to be.

"However, I'm always on the hunt for new technology, so we added in the Greensmaster Flex 2120 walk-behind mower to this deal. The results from which have particularly impressed me. The floating head prevents scalping and leaves a smooth finish every time, and we've seen an improvement to the greens."

It was this faith in the brand, combined with the "brilliant service we've had from Reesink Turfcare" and a successful demo that resulted in the installation of a Lynx central control system and over a thousand Toro sprinklers last year. Here we take the opportunity to hear how the system's performed since it was turned on in the spring of 2018 and faced one of the biggest tests for any irrigation system - a record-breaking heatwave!

Royal St George's Golf Club is a traditional links course set amongst sand dunes, so of course its soil is naturally dry and fast-draining. "Hot, dry weather affects us anyway and the impact of having an old system had taken its toll over the last few years, so not only did the new system have a job in hand to bring the course back to the standard it was, but to bring further improvement too, all in the face of excessive dry weather," says Paul.

"Despite all that we noticed instantly the difference precise and accurate control made to the course. Since we had Toro Lynx control and Toro sprinklers installed last year, we've been able to irrigate more precisely and, in the process, we've seen huge water savings and a big improvement to the course."

Such is the relationship with Toro and Reesink that during The Open this year Reesink will be loaning the club more machines to keep up with the maintenance a tournament demands.

"We'll start really gearing things up a couple of weeks before the tournament and then be out cutting every day during the event. Having the extra Toro machines on loan will be a huge help and is another step further strengthening our relationship with Toro and Reesink," concludes Paul.