Managing a football pitch in Norway brings with it challenges very different from those faced in many other parts of the world. Because of the winter snowfall, their playing season runs from mid-March to late November, meaning the playing surface must be brought up to scratch during a time when the air temperature can still be minus twenty degrees centigrade.

Hilde said: "The early start is a big issue because it's more difficult to have your pitch in good condition during March than in late-November, due to temperatures and grass condition after winter. You have to fool nature in a way. I do use the lights in the spring, but only after the grass has started to come to life again. The biggest issue is temperature. I use the undersoil heating and covers to get the temperature back up to 10-11 degrees, because then it starts to happen with the grass."

She explained how results seen in spring were partly down to nature, but also the preparation put in during the previous autumn. "The last match is 25th November this year and I'll gradually turn down the heating under the pitch to let it go into hibernation. After the last match, I do some aeration if possible and the weather allows it. I have the under-soil heating going during the autumn to keep the temperature up and to keep the grass growing, and also to stop the ground from freezing and keep the pitch playable. This is together with lighting rigs. I have four T60 mobile lighting rigs and one small one for the goal mouths."

Snow can be metres deep in Norway during the winter and Hilde said it was not practical or beneficial to cover the pitch during this time.

There is ongoing research into covering football pitches and golf greens, when the snow falls, in places such as Scandinavia, and the general consensus is that doing it is a waste of time. Problems with this method include water leaking under the covers and, also, covers render a football pitch's undersoil heating useless come spring when the snow is to be melted.

"Normally, when the covers are back on in the spring and I see that it might snow, I have to take them off because if I get snow on top of the covers, the under-soil heating won't melt the snow," Hilde continued. "My opinion is that it is best to let nature take its course, as it is only two-and-a-half months when it is under snow anyway."

With the playing season beginning in March, the first preparations for getting the pitch into a playable condition begin in mid-February. Contractors are brought in to help with the substantial task of removing the snow from the surface. Hilde explained the process: "We take the snow out of the stadium by having two tractors moving next to each other. One has a snow blower attached and one a trailer to collect the snow. Then, this is taken out of the stadium where large trucks drive it to a place where it can be dumped. It's expensive to do this, so I only take away the snow if it's above 30cm or so on the pitch."

"My other option is to just put on the undersoil heating and melt it down, but it takes a long time, and there is then a high risk of getting snow mould and other diseases. Even when we take off the snow, we don't scrape it down to the grass and always leave a layer on top. When all the snow has been taken away from the pitch, depending on temperature, I'll try and get some liquid fertiliser on quite soon after."

"Following this, it is all about bringing the pitch back to life. There is no formula for how this is done in the spring because it depends entirely on the outcome of winter."

With the playing season running through the summer, there is little time for renovation work and Hilde spoke about this: "Compared to England, where they can renovate to keep the desired grass species, we can't do that, so we get grasses like poa annua sneaking in. Saying this though, when it is the World Cup, we will get the opportunity to do some bigger renovations such as hollow coring, verticutting, seeding and topdressing. There are advantages to playing through summer though because it's very easy in many ways, if you have healthy turf, to keep the pitch in good condition." 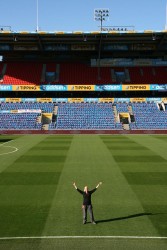 She said it was a dream come true to be able to prepare a pitch for the team she has supported all her life, and added: "I'm a huge Vålerenga fan and to be able to give the players on my team the best quality surface they could have was something that was both rewarding and enjoyable for me."

Making the switch from being a greenkeeper to a groundswoman felt natural for Hilde. She said: "I feel I fit in better at a football stadium because there is always a match to work toward. Also, they use the grass in a different way on golf courses. What I always enjoyed from working on golf courses was the big tournaments. I was lucky enough to work at the Dunhill Cup twice and the American Express Championship at Mount Juliet, in Ireland, and I loved the experience of the big tournaments. Now, working at a football pitch, it's like having a tournament like this every week, or at least every second week. It doesn't matter if I'm preparing the pitch for a national game against England or a club friendly, I get the same satisfaction no matter what; it's a buzz."

"The most enjoyable match I have prepared a pitch for was the first match of our season this year, which was Vålerenga vs Haugesund. It was because it was the first match where I had been responsible for the whole season, including winter, before. In the springtime is the most nerve-wracking time because, although the weather has a big say in how the pitch will look after winter, you have to do everything correctly in the autumn time as well. My feeling for the first match was that I was very happy with the result, and it was a pleasure for me to present a high quality pitch during March. I was more nervous for this match than any during my first year of looking after the pitch, as I wanted to present the pitch to the same quality it had been the previous year."

"After talking to other groundsmen in Norway, they often have training on their main pitch every day through the week. I believe that's something that could be improved in Norwegian football; proper training facilities."

This is the first year in Norway in which there will be an award for the best pitch. After each match, the captain of the away team gives a mark for the pitch and, at the end of the season, the scores will be added up to determine the overall winner. Hilde's pitch was joint-leading along with Lillestrøm SK at the time of writing.

Hilde takes the challenges involved in preparing a pitch in Norway in her stride. She added: "I don't feel pressure too much here. If there is pressure, I always try and turn it into a positive. I'm naturally a relaxed person and I've been lucky, because I've had good conditions and good people to work with at the stadium. Of course, there is stress before big games about how the pitch will cope but, as time goes on, I'm getting more confident that my preparations will produce a surface that everyone is happy with. I think it is just fun now, and I get excited about preparing the pitch to the best of my abilities. I wouldn't be in this job if this wasn't the case."