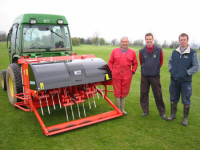 The new machine will be used extensively on greens, tees, fairways and approaches to help improve drainage and relieve compaction.

Scott, who heads a team of four, has worked at the Club for 16 years, the last 7 as head greenkeeper. Speaking recently after the installation of the new machine he said,
"We looked at what was out there and plumped for the Wiedenmann after a demonstration from our local dealer, Henton & Chattell. The XP is a universal machine, very solidly built and we can use it all around the course. Initially, we will use the 19mm and 25mm diameter tines at around 300mm depth on the fairways to get in as deep as possible to improve water dispersion and relieve compaction. We'll use 12mm and 19mm tines on the tees and 12mm on the greens.

"Having our own machine we have the flexibility to get out when conditions are right. The XP is very good; easy to adjust both the depth and heave and the tine retention system is so simple. Also, the support from the manufacturer has been superb; they are very hands on and really understand the principles, mechanics and benefits of deep aeration."

The course at Ashbourne was extended to 18-holes in 1999 and is now a 6,365 yard par 71 set in rolling parkland with clever use of the natural terrain and water hazards. It has spectacular views into Dovedale and the Peak District.