Run by its members, Essex based Radwinter Bowls Club has a number of teams playing in the Essex and Steeple Bumstead leagues. Recently the club faced difficulties with water ponding on the green during heavy rainfall, which was frustrating for the bowlers because once flooded it would be several days before the green was fit to play, and even then it would play very slowly due to the retained water. This was in spite of the efforts of Purse Turf Care, the Essex and Cambridgeshire business maintaining several bowls greens and football pitches in the area. 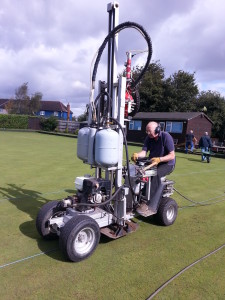 "There was a good, well-draining layer of root medium built up by annual top dressing," says Vic Purse, "but even spiking up to a 200mm depth didn't cure the problem."

He and the members decided to call in Terrain Aeration, with whom he had worked before, and have the green aerated down to a metre, producing vertical drain channels over the whole area. Terrain used their Scamper Terralift, a lightweight version of their Airforce machine and, while the 660kg compressor unit remained stationary off the green, the Scamper worked across the area in rows two metres apart, creating 400 one-metre deep drainage holes. This is to allow drainage to the sub soil and essential to the process is the shattering of the subsoil with an air blast.

The Radwinter sub soil proved to be very dry, heavy red clay which was extremely hard and required use of the JCB road breaker hammer built into the machine to probe to full depth on nearly all the holes. The top surface had already been spiked recently with pencil tines to about 75mm depth and this allowed the high air pressure needed to crack the hard clay at depth to escape through the turf with minimal disturbance. Amused onlookers watched a good deal of the fill ejected forcibly upwards from the spiked holes as the air escaped, landing on the Terrain operator's sun hat! This was proof though that the air was getting back to the surface, as much as one to two metres away from the point it was blown into the soil, showing the soil was being fractured at depth.

A 'normal' bowling green takes about four to five hours to treat but, in the case of Radwinter, the length of time it took to hammer the probe into the obdurate clay stretched the process to over eight hours. The treatment was followed by scarification, top dressing and over seeding. This was not the first time Vic Purse had seen the benefits of greens treated with the Terralift. The only complaint he's had to date is that the bowlers now only have time for one pint of beer before the surface is playable after heavy rain.