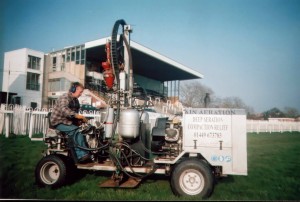 Terrain Aeration's Terralift fleet has proved very effective in aerating racecourses. So much so that most racecourses in the UK have had deep aeration treatment on parts of the courses and in the parade rings. Roots need air to breathe and the Terralift injects compressed air into the root zone, breaks up compaction panning and provides relief from waterlogging.

The result is an increase in the percentage of oxygen available to the roots. This has been seen to be highly effective at Aintree by the jumps, just before the Grand National. The special areas for treatment would be the take-off and landing areas and on corners where horses tend to tighten up and compact a narrow area on the bends.

The Terralift machine's probe reaches one metre depth and using 2m centre spacings it decompacts the ground, while leaving only 3.8cm/1½" holes which are not noticeable to the horses' hooves thundering over them. Dried seaweed is injected to keep the underground fissures open. Other courses to have benefitted include Worcester, where they have had flooding, Haydock Park in the Parade Ring with lots of four and two footed traffic, and Towcester where treatment was carried out on the landing and take-off areas down by the old water course on a Saturday and they were racing again by the following Thursday.

Windsor Racecourse is a prime example of the Terralift's work, after the Saltex show where the track ways had been laid for several weeks. Here it was necessary to get the turf aerated and 'lifted' using an Opico spring rake and then re-seed. A polytunnel was erected over the newly seeded area to sweat the seed for three weeks to get the grass the same colour since horses seeing a different colour would try to jump it.