One problem facing housebuilders both before and after development is ground compaction. Open spaces designated for building may suffer years of neglect, constant foot traffic or use of wheeled machinery resulting in panning deep below the surface. 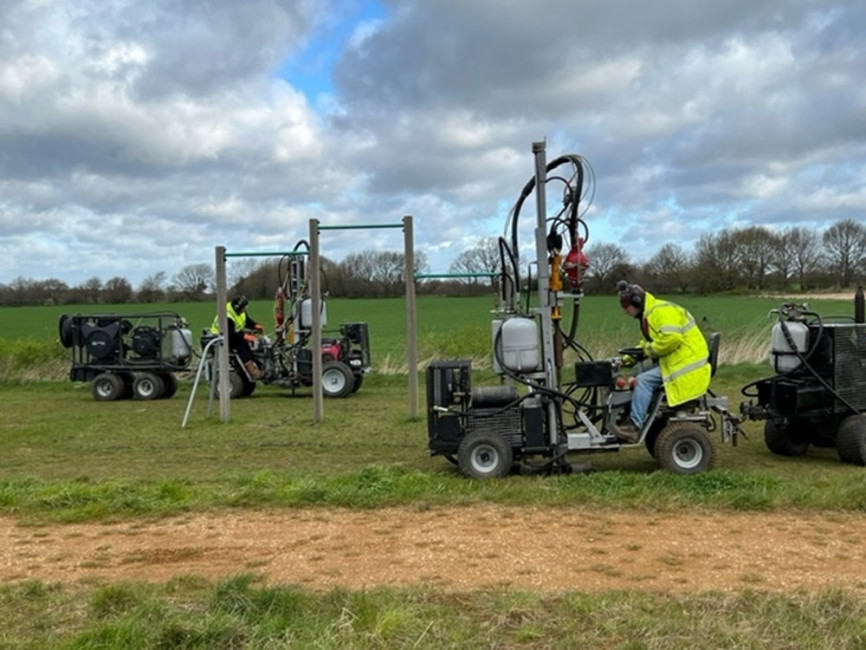 Similarly, during the building process bulldozers, diggers, dumper trucks and concrete mixer lorries flatten the air out of the soil in areas that will eventually become gardens and shared grassed areas. Often the land itself may have had previous buildings, and the subsoil contains old bricks, rubble and landfill. All these factors contribute to waterlogging which normal aeration cannot relieve.

Terrain Aeration's Housebuilder's Division has developed the specialist machinery and a full service needed for deep penetration aeration to relieve the problem of heavy compaction and waterlogging. Designed to access tight areas, their Terralift tracked aerator can enter small gardens through a gateway or garage and provide unique one-metre-deep aeration. At this depth, compressed air is released via a probe to fracture the soil and create fissures, allowing drainage and letting oxygen reach deep into the soil. Such work has been carried out for many years by Terrain Aeration for the UK's leading housebuilders including Taylor-Wimpey, Barratt and Persimmon.

A typical recent contract saw them treating ten small gardens and a small open flower meadow for Barratt David Wilson Homes in East Anglia while a project for Taylor-Wimpey was treating an open space so the housing development could be signed off with the council as 'decompacted'. In this instance, the full-size Terralift machines were used, driving the JCB road breaker probe into the ground. At one metre depth the compressed air, up to 20Bar/280psi, was released from the probe which, on the tail-end of the blast, injects dried seaweed. This sticks to the fissures created as the Terralift process is repeated at two-metre centre spacing on a staggered grid. The seaweed expands and contracts with the soil's moisture content to allow drainage and aeration.

The Terrain Aeration process has been in operation for over thirty years, providing compaction relief for new-build gardens, sports grounds, golf courses, amenity areas and public spaces. The Terrain Aeration Tree Division provides the specialist treatment for Royal Parks and arboriculturalists throughout the UK.