The award-winning Earl's Court Square Garden was originally laid out as part of the Edwardes Estate in the 1870s, and construction of the properties of Earl's Court Square began. It was well-managed with professional gardeners until the Second World War, when the original cast-iron railings were removed and five emergency water tanks filled the southern half of the garden. Post-war it became much neglected and remained more like a building site until the mid-seventies when the present layout was designed. A children's playground was added in 1980 and the mature London plane trees were pruned and maintained. The Earl's Court Square Garden is one of the 37 Garden Squares in the Royal Borough of Kensington and Chelsea. 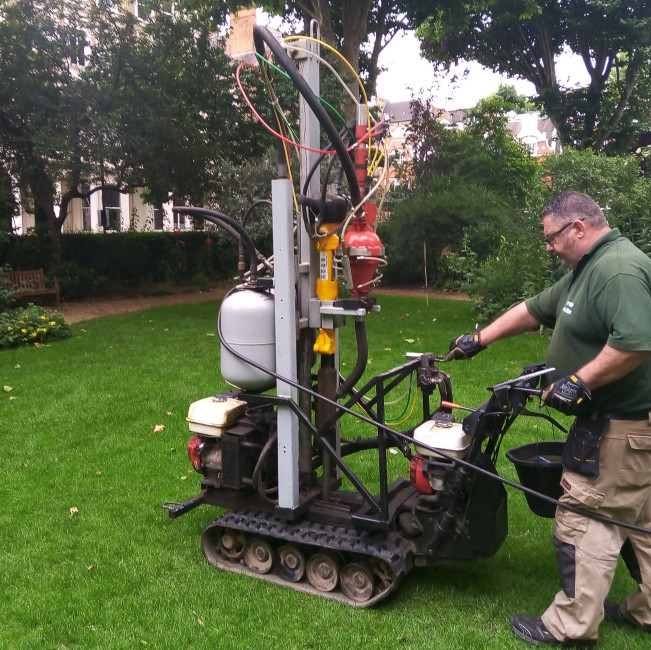 The garden is much used by residents and hosts neighbourhood social events which ultimately led to the ground becoming severely compacted and dried out in summer, while in winter it became heavily waterlogged. Aeration was done regularly, and the grass re-seeded, but the problems remained.

"We learned of the work done by Terrain Aeration in Hyde Park after Winter Wonderland," says Katrina Quinton, Chairperson of the garden management sub-committee, "and we thought the principles would apply here. They were scheduled to come to us in 2020, but a period of heavy rain and then Covid-19 intervened. The garden was a godsend for the community during lockdown, but the pooling was still a major problem."

As soon as they were able, Terrain Aeration treated the area using their Terralift Tracker, which is designed for access in tight spaces. It works in the same way as the full-size Terralift machines used in Hyde Park. The Tracker hammers a hollow probe one metre into the soil, releasing a blast of compressed air to fracture the compaction and create interlinked fissures. They simultaneously injected dried seaweed into the fissures, and this expands and contracts with the moisture content in the ground. The probe is inserted in equal spacing on a grid pattern, to ensure the underground fracturing overlaps. The resulting holes are top-filled with Lytag, lightweight aggregate, to provide a long-term aeration and ventilation shaft which will encourage air and water into the root zone. The result is a healthier soil structure; the compaction is relieved and a stronger root growth is promoted. The areas in the garden around the trees, which are greedy for water, were also treated to a depth of eighteen inches.

Katrina says: "the wonderful collection of people from Suffolk and their strange-looking machine came and worked without fuss, leaving the area clean and usable immediately. The following day it rained heavily and we're delighted to say there was no longer any pooling. A great job."