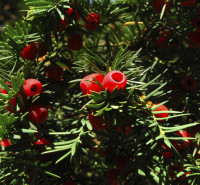 Following an increase in reports of phytophthora disease in Yew trees, Terrain Aeration launches a new service to attack the problem.

Affected trees are treated with a mixture of parasitic bacteria and beneficial fungi after the root area has been de-compacted using one metre deep compressed air aeration.

"Phytophthora is a water bourn disease, and once we've opened up the soil and injected dried, milled seaweed to keep the underground cavities open there's a better chance of addressing the problem," says Terrain Aeration's Operations Manager Lynda Green. "We treated the Yew Tree Walk at Sissinghurst in Kent, and managed to arrest the problem. If we're called in at the first signs of disease, indications are that we can eradicate it."

Terrain's 'Fight Phytophthora' service is aimed at disease stricken Yews on golf courses, parks and gardens, cemeteries and Local Authority public spaces. For further information visit the company on Stand B44 or contact them on Tel: 01449 673783, website www.terrainaeration.com
Harrogate Week 2009