0 Terry the Golfer - in his dreams

Terry the golfer- in his dreams 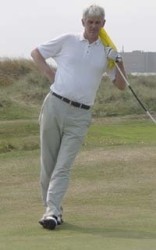 Terry Kane of Moor Allerton Golf Club, Leeds, is a well travelled golfer, 9 handicap, although you would think he should have turned professional due to the amount of time spent practising, playing and lessons invested in.

Terry is seen above taking a quick nap whilst recently playing at Seaton Carew, reflecting on his sub standard round that cost him the price of lunch after losing 3 & 2 with his partner, seen struggling out of one of the many bunkers, Colin Shanks (assistant professional) to Richard Lane (Professional) and Henry Stone (Vice Captain), all from Moor Allerton. 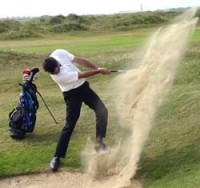 Editor's note: We will be creating a new section on the new website for members to place articles like the one above. The section will be called In the Club and sports club members can use it to put on snippets of information about their club and to have a bit of light hearted fun. Many thanks to Henry for being the inspiration.