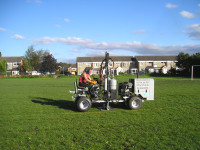 Russell Norton, Technical Manager of the Green Care Section, (part of the Directorate of Urban Environment Management Division) says that the decision was based on findings resulting from a comparison study carried out at the end of last year. "At Dudley Wood Playing Fields we have three pitches which are all played on to the same extent and have the same subsoil of predominantly pit spoil and clay," he explains. "As they all suffered from poor drainage due to compaction and hard-pan, they presented us with an ideal opportunity to compare three different aeration methods. We invited Terrain Aeration to treat one with their Airforce Terralift machinery, and another company to employ their Rotodrain and Verti-drain on the two remaining pitches."

Having injected compressed air, one metre down on a staggered grid pattern of two metre spacings, Terrain Aeration returned to Suffolk while their work was assessed throughout the playing season. "The Football League and Football Forum found that the pitch treated by Terrain Aeration stood up better to the rigors of play, and the company's aeration process had a better impact on the pitch," reports Russell Norton. "During the heavy summer rains, this pitch had no problems with drainage."

For further information on the de-compaction services provided by Terrain Aeration, contact the company on Tel: 01449 673783 or visit their website at: www.terrainaeration.co.uk