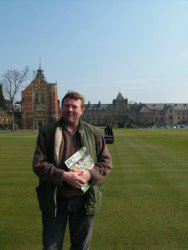 Tonbridge School in Kent has a reputation for producing good cricketers and quality cricket pitches. One of the most famous pupils of this 450 year old public school is Colin Cowdrey, of Kent and England fame, who boarded there between 1946 and 1951.

The Director of Grounds is George Alexander and he oversees 100 acres of sports fields. The all boys school has a 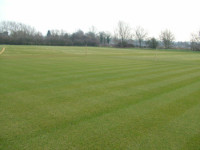 Nothing like this had ever been done before. George sought advice from Chris Woods of the ECB who also thought it a good idea. A brand new cricket square was constructed on a drainage raft, on which was laid 150 mm of native clay loam. This was then topped off with six different cricket loams laid to the same depth of 100mm. The selected loams were Ongar, Kaloam, Mendip,Boughton, GOSTD 125 and Withers Surrey.

The square was completed in July 2001. The six are maintained identically, with the first games played in May 2002. The idea was to see how the loams performed after having identical maintenance treatments. Mowing, rolling, watering,feeding programmes,scarifying, pitch preparations and repairs were all the same. George even ensured the amount of games played on each was the same.

Now into the fourth year of the experiment, George has witnessed a number of interesting physical traits and different performances from the wickets. In particular, when they have dried out, the bounce and pace difference has been quite significant, providing interesting conditions for both bowlers and batsmen alike. 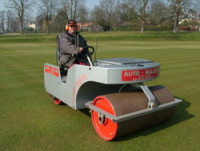 This experiment has brought a lot of information to the table and, potentially, much more can be assessed in future years. George is currently working with Cranfield University to see if any students would be available to work on the square to obtain some scientific data to underpin the practical results experienced by George and his staff.

It is a wonderful opportunity to collect data on rolling factors, moisture levels and ball performance on different loams maintained identically. In this way the relative merits of loams for certain levels of the sport can be measured. It will be an important safety guide.

George and his staff must be congratulated for their vision and commitment. Not only will the pupils of the school benefit in the long run, but also the sport of cricket.