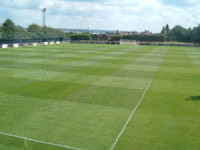 I have to admit that I rarely stay to watch the games but I wanted to be there on the opening day to gauge the reactions of the players regarding the pitch. Having spent virtually every day the previous week cutting the pitch to enhance the aesthetics of it, I was hoping for positive comments after the game and indeed got them. Even at this level I feel presentation is as important, if not more important, as the higher leagues. When players see a "groomed" pitch they seem to muster extra energy from somewhere to perform well on it. This is very much a positive as far as I am concerned.

On the Thursday before the game, I had a chat with our new manager, Ross Hill. Up to yet he has agreed not to use the pitch for training sessions, which was pleasing for me to hear I can tell you. This is because that it seems almost certain that I am going to have to contend with four teams using the pitch this season - Tividale FC, Tividale FC under 15's, Oakham United and Tividale FC over 40's will all be doing battle out there. The latter appeals to me and I may just get the old boots out!!

However, he did ask me if I could cut the pitch shorter as it would suit the style of play for a few of his new signings. I told him that I cut the pitch to 37mm and, as I have so many games to contend with, cutting any shorter could compromise the pitch detrimentally. As he is a Wolves supporter (won't hold that against you Ross!!) I stated that this wasn't Molineux and that I didn't have the resources the groundstaff there have available to them. It was said tongue in cheek, but I was completely serious. I explained the ins and outs of why I do what I do, and he was ok with that. As I cut the pitch so regularly it does appear shorter than it actually is anyway. There was another game the following morning with Oakham United entertaining local rivals, Wernley FC, in their first of two friendlies before their season begins in September. The home side were defeated 2-0 but everyone was happy with the pitch. I was out there again in the afternoon mowing it after the game had finished. It was a lovely afternoon and everyone was out on the patio area admiring the view! When I had finished I was asked why I had cut the pitch again when I had only cut it the day before. I simply explained that it was needed and the pitch would benefit from it. As the sun moved around, the mowing bands became more prominent and everyone noticed the difference in appearance. Someone even asked me if I used different coloured grass!! I headed straight for the bar before I could answer without offending them!! 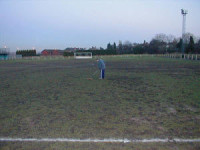 On a final note I would like to say that there seems to be a new buzz around Tividale FC at the moment. The manager has certainly played a part in this but I am told that the pitch is attracting prospective players too. As I see it, all of us at the club play a part whether as paid workers or volunteers. I see my role as making the pitch as good as possible. Theoretically, the knock on effect could be the arrival of quality players, better standard of football, increased gate receipts and bar sales etc. On more than one occasion I have stated that clubs at our level survive on such things. Who knows, I might even get that pay rise I have asked for! 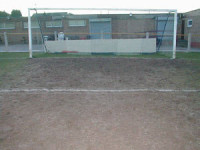 You would think that as a groundsman of a football club that I would live and breathe football. Over the years I have lost my footballing brain and sometimes get baffled by football banter! However, this season feels different somehow. I know the buzz at Tividale FC is part of it but I also think that being part of the pitch staff at Villa Park again on matchdays has also been a contributory factor. I was kindly asked by Head Groundsman, Jonathon Calderwood, if I would like to help and I was more than happy to accept. He has a wealth of experience that I am already gaining from. We do what's necessary on the day and we all get on well, with almost four hours of mickey taking the norm!! Happy days are here again.

The photos that accompany this report show the complete transformation of my pitch over the years. If some of you out there have pitches similar to how mine was please take heart and don't despair. With hard work and the back up from your own powers that be, you too will achieve similar results.

Good luck to you all for the forthcoming season.