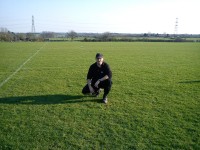 Since the launch of Vitax Amenity's award winning Enhance R range of four-in-one fertilisers, Greenkeepers, Groundsmen and Local Authorities from across the U.K. have been putting the products to work with encouraging results.

Stuart Mottershaw, Grounds Maintenance Supervisor at Burbage Parish Council, the second biggest parish in the country, has had a problem with his main football pitch ever since he took over in 2007. "We had the pitch professionally drained but were left with very sandy soil which didn't keep its nutrients," he said.

Then, 18 months ago, with help from Vitax Amenity's Andy Gurney, Stuart had soil samples taken which were sent away for analysis.

"The results showed that the pitch was deficient in almost all the trace elements and Vitax advised on how we could overcome this problem," said Stuart. "We applied a selected Vitax fertiliser and then, in a separate application, applied Amino-Sorb bio-stimulant with great results.

"However, when Vitax launched Enhance R, the four-in-one fertiliser incorporating Amino-Sorb, we trialled its autumn/winter formulation. We immediately saved time and money because we able to combine two applications in one and the reduced application rates for Enhance R, means that it comes in smaller, 20 kilo bags which are easier to handle and save us storage space."

Proof that the product had worked came from an elderly resident who had been instrumental in setting up the football club in the 1980s. "He stopped me and said he'd never seen the pitch looking as good," Stuart recalls. "Now all the teams want to play on this pitch all the time." 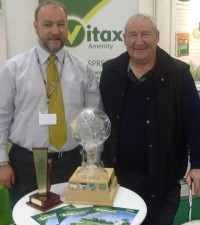 Although he feels that the fertiliser has not been given a fair trial due to the amount of chemical that was already present in the root zone, he was happy with the longevity of the product and found the colour of the sward superb. His greens also came out of winter free from disease, although he did still give the greens one application of fungicide. Robert is planning to use Enhance R again this year.

"I was looking for a bit of colour and growth and nothing was happening," he said. "Our first home league game against Celtic was coming up on the August14 and the pitch wasn't reacting the way it should."

Working with Douglas Hart of Terra Firma (Scotland), one of Vitax Amenity's distributors, Tommy applied Enhance R autumn/winter formulation around the first week of August and got the response he needed.

"I got a quick reaction with an increase in both colour and growth," he said "I'm happy with Enhance R and I'll continue to use the product."