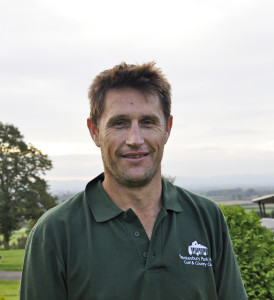 Tewkesbury Park Golf Club near Cheltenham is set in rolling countryside, high above the historic town of Tewkesbury with panoramic views of the Abbey, Malvern Hills and Cotswold Hills.

Course manager John Hall is now in his second spell at the club and has been in his current position since March 2012.

He heads a team of five with the addition of a summer casual and is responsible for the 18-hole course, the 6-hole par 3 course and the hotel grounds; in total 210 managed acres.

"It's fair to say that the hotel and golf club, which was previously owned by the Whitbread Group, has had a bumpy ride over the past few years with previous management companies going into receivership," he said. "We're through that now and the current management have been very supportive and supplied the investment for this new equipment.

"The Jacobsen Fairway 305, Ransomes 6010 and Cushman Turf-Truckster are straight forward replacements for our previous machines. We kept the old 305, so we now have two fairway mowers and we can have them all mowed by 9 am, well ahead of any golfers.

"The Jacobsen Eclipse 322 hybrid greens mower is doing a great job for us. I first saw it at Ransomes Jacobsen's Open Day last year and also at some local demonstrations organised by TH White.

This season the greens have gone to another level; a combination of the new technology in the mower and our Terra Lift fertiliser programme. We're stimping consistently at 10, then at around 7 during renovation and within a week we're back up to 10 again."

John is an Australian national, who first came to the UK in 2004, working at Wokefield Park Golf Club near Reading in Berkshire. After returning to his homeland he came back to the UK in February 2010 and took up his first post at Tewkesbury Park.

He was made redu

ndant later that year during one of the periods of uncertainty and became a self-employed gardener. This was going back to his roots, as he trained in horticulture and turf management at TAFE New South Wales, Australia's leading vocational education and training provider.

"It might sound sentimental," he concluded, "but working here is more of a vocation than a job. We've got a great team and are surrounded by hills with stunning views wherever you are on the course. Where else would you want to work!"