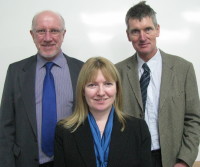 Members of the Turfgrass Growers Association met last week to reflect on a year when water dominated both the headlines and its activities.

"We've had a busy and challenging year, particularly during the water restrictions," said TGA Chief Executive Tim Mudge, "and there's plenty on our agenda in 2013, including the revision of British Standard 3969 for General Purpose Turf and of course our Turf Show which will be held on 9th July at Fineturf."

"Our November members' meeting has become a 'must-attend' event for the turf industry and we were delighted to see a full-house to hear a great line up of speakers."

Fifty growers and trade representatives gathered to hear key note speaker Gail Soutar, Senior CAP and International Affairs Adviser for the National Farmers Union, explain the current round of CAP reforms and the implications for the turfgrass industry.

The group also heard presentations from Andersons on the benefits of benchmarking, and from Clive Carter, Director of Groundcare at IPU Group, on fuel treatments. The TGA also welcomed Arnaud Dugast from French turf grower Sitoflor who gave an overview of turf production across the Channel.

The TGA has launched a website for its 2013 Turf Show at www.turfshow.co.uk. It has all the latest information for those planning to attend the show and for companies who may be interested in exhibiting at or sponsoring the biennial event, which will be hosted by Simon Hutton at Fineturf on 9th July.

Formed in 1994 (then called TPI (UK) Ltd.) it became the Turfgrass Growers Association in 1997 and now comprises more than 60 members. Its member growers are collectively responsible for producing approximately 70% of the cultivated turf grown in the British Isles.

The TGA Turf Show 2013 will be held on Tuesday 9th July. More information can be found at www.turfshow.co.uk