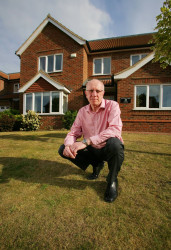 On the day it was revealed that areas of the UK are officially in drought, the Turfgrass Growers Association provided water companies across the country with new information to help educate homeowners that there's no need to water established turf.

Four new factsheets, available from its website at www.turfgrass.co.uk, focus on looking after newly laid and established lawns in warm, dry weather.

They advise homeowners to avoid watering established lawns after the driest spring in 20 years put pressure on water supplies.

Tim Mudge, Chief Executive of the TGA, whose members produce more than 70% of the turf grown in the British Isles, says that during hot weather, the watering of established lawns is, in most situations, wasteful and unnecessary.

"Our message is not to worry if your lawn goes brown during the summer. Going brown is the natural survival mechanism of grass. When water is in short supply grass responds by shutting down. The brown colour shows that it has stopped growing until more favourable conditions return. We all have an obligation to use water responsibly and we're trying to do our bit to get the water conservation message across."

"Because turf requires watering for the first 28 days after it has been laid, we have also drawn the water companies' attention to the Code of Practice and Guidance on Water Use Restrictions which recommends a discretionary 28 day exemption from discretionary use bans for newly laid turf. The TGA has stressed the importance both for the environment and the economy that the laying of turf continues during the summer months."
ENDS - Words 274.