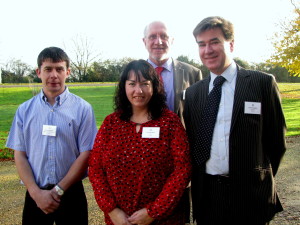 Members of the Turfgrass Growers Association met in Peterborough last week to reflect on this year's activities and prepare for the year ahead.

"We've had a busy year, with a fantastic Turf Show in July followed by a spell of hot, dry weather that pushed our 'brown lawns are cool' message to the top of the agenda," said TGA Chief Executive Tim Mudge.

Growers and trade members of the association heard from three eminent industry speakers.

First to address them was Jacob Tompkins, Managing Director of Waterwise, the independent, not for profit organisation that has become the leading authority on water efficiency in the UK and Europe.

Describing the increasing pressures on water globally, with greater competition and more demand than ever, he praised the TGA's 'brown lawns' campaign adding that the association, its members and their supply chain are key to educating consumers about using water responsibly.

"Turf is a preferable surface to decking, slabs and artificial lawns," he added. It plays an important part in water sensitive urban design, reducing heat and flood risks caused by run off, replenishing groundwater reserves and improving the wellbeing of residents."

He revealed the challenges of maintaining turf in a high-pressure environment and in managing a televised facility. He detailed the innovations he uses to encourage grass growth in shaded areas, and explained how Hawk-Eye goal line technology works at Upton Park.

He ended his presentation by answering members' questions about the club's move to the Olympic Stadium in 2016.

Dr Ruth Mann from STRI concluded the speaker programme with a comprehensive update on the Sustainable Use, Machinery and Water Framework Directives, which affect the working practices of all those working in the turf and amenity sector.

She explained how the new legislation will impact on growers and the end users of turf.