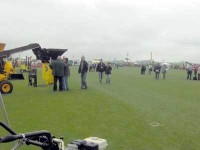 The Turf Growers Association (TGA) Turf Show took place on 29th and 30th June, and was hosted by Simon Hutton at his turf nursery in Honington Nr Grantham, Lincolnshire.

On each occasion the show is hosted by one of the TGA's members. The Association was formed in 1995 and now has 39 members and 22 affiliated members who are dedicated to the advancement of quality turf production. The TGA is collectively responsible for producing approximately 70% of the cultivated turf grown in the British Isles.

Since its formation the TGA has been at the forefront of raising the standard of cultivated turf for both the professional and domestic markets. 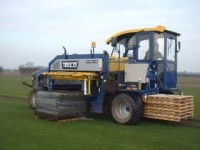 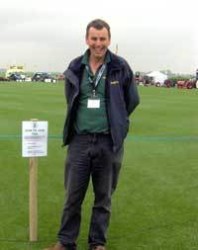 Attendance figures were 450 plus, double the previous show's, and included visitors from Italy, Sweden, Holland and France. More than 40 exhibitors attended, some were located indoors but the majority were positioned on the perimeter of the main central arena. Turf lifting and harvesting demonstrations were staged on areas adjacent to the show site.

Trilo displayed a large number of machines including their new Hytek 110 turf harvester, that auto stacks. This machine is the only harvester that unloads to the side, allowing the whole operation to be conducted by a single operator. This machine will harvest comfortably 1000 square metres per hour. The machine will stack either 15 or 18 rolls per layer on the pallet at the touch of a button.

Trebro UK are one of the main manufacturers of turf harvesters, and they had two on show - one capable of harvesting 10,000 rolls a day and the other 20,000 rolls. The machines can be calibrated to remove precisely the amount of soil required to meet the customer specification and to minimise the impact on the nursery's soil base.

This year the TGA invited a number of ancillary companies to attend, such as Richard Campey, Gary Mumby from Blec and Bruce Alexander from Wiedenmann demonstrating and showing a range of cultivation and renovation machinery.

Rotomec were showing some of their rotary deck mowers, which are now becoming popular, particularly in the golf sector.

Kirby Tyres were keen to show off their new range of durable tyres designed specifically for turf use.

In the main tent there were a number of seed and fertiliser companies present:-

During the day I came across many familiar faces, including Bob Scott from British Seed Houses and Gordon McKillop (STRI). One of the key topics of conversation was the increasing use of Smooth Stalk Meadow Grass in new turf mixes. 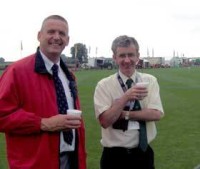 As for Simon Hutton, he can congratulate himself on a well organised event. It was my first TGA show and it will certainly not be my last.

** Simon's company, Fineturf, is one of the smallest of the country's turf producers with around 85 acres. Most of the turf produced is used in the golf market.