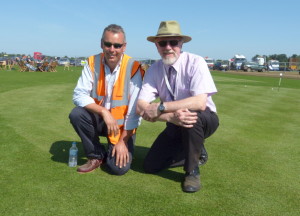 Travelling to the event from France, Denmark, the USA and throughout the United Kingdom and Ireland, visitors were treated to a virtually continuous series of machinery demonstrations throughout the day presented by nine of the 25 companies who had taken exhibition space at the TGA Turf Show.

All found plenty to see and talk about at a biennial event that is recognised as the showcase for all that is best in quality turf production, enabling many of the products and services used by the turf-growing industry to be viewed and assessed on the same day in the same place.

In addition to seeing in action the latest machinery needed to establish, nurture, harvest and transport turf, visitors were able to talk with leading producers and suppliers of grass seed, fertilisers, crop protection products, drainage and water pipe, irrigation equipment and complementary systems designed to enhance the accuracy and efficiency of field-scale farming operations.

Useful business was also done on the day, with several companies reporting sales of equipment "off the stand" as well as requests for post-show demonstrations. 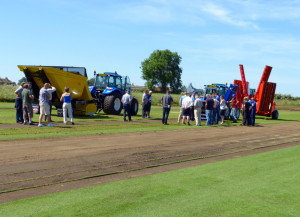 Others used the TGA Turf Show as a launch pad for new products that will not be seen by the wider turf maintenance industry until September's IOG Saltex Show.

TGA Chief Executive, Tim Mudge, commented that the event had exceeded all initial expectations, helped by perfect weather and the first-class planning and organisation of host farm, Fineturf Ltd, both before and during the show.

"Visitors are not judged by their numbers but by their level of interest in quality turf production and decision-making abilities," he said.

"This year's Turf Show met all of the criteria laid down by the TGA in terms of visitor and exhibitor satisfaction and we are confident that everyone left with greater knowledge than when they arrived."

"In addition to being a great place to network, the TGA Turf Show allows the industry to demonstrate and promote the highest standards in quality turf production systems and practises. We are delighted to have helped support those objectives."

More information can be found at www.turfgrass.co.uk