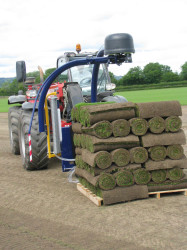 Companies who exhibited at the Turfgrass Growers Association's Turf Show last month received a good level of enquiries from the event.

The biennial show was hosted by TGA members Jeff & Barbara Farnaby and their son Paul at their turf farm just off the A1 at Scotch Corner.

Trimax Mowing Systems chose the event as the European debut for its impressive new X-WAM roller mower. Imported from New Zealand, it has a cutting width of 10.5 metres and can cut 30 acres per hour. Marketing Manager, Michael Sievwright, said: "We received five or six strong leads, which exceeded our expectations for a machine of this size. It was great to demonstrate its capabilities to growers not just from the UK, but from other countries too. We received some very positive feedback indeed."

Equally positive in his summary of the show was John Bailey from Cargotec: "It was a great event. The site was excellent, the demonstrations were well run and we were delighted with the number of enquiries we received about our Moffett truck-mounted forklifts. It's of enormous benefit to us to have such a large number of growers in one place on the same day. It would take us months and cost us thousands of pounds to go and see them all separately." 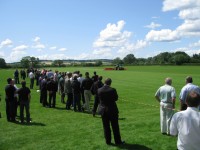 Growers travelled to the event from as far afield as Australia, Hungary, Romania and The Netherlands.

TGA Chief Executive, Tim Mudge, said he was pleased with the feedback they'd received following the event: "In the current economic climate, it's tough for anyone to stage a trade show and it's vital that exhibitors receive value for money. We have continually adapted the format of the show to reflect the thoughts and requirements of our exhibitors and visitors and although the number of visitors was down on our 2009 show, the number of grower companies that were represented was up."