Family-run South Yorkshire Turf Supplies who have grown turf since 1945 and Northallerton-based C&K Farnaby have joined the association which comprises more than 60 members and affiliated companies collectively responsible for producing approximately 70% of the cultivated turf grown in the British Isles. Northwest Turf have also rejoined after a short absence.

The association's notable achievements in recent years, including a series of successful turf shows and the inclusion of its quality standards in the landscaping contracts for the 2012 Olympic park, have been driven by its dedicated and highly effective council. At the recent members' meeting, three new council members were appointed for a three year term - Jeff Farnaby from J&B Farnaby as a grower member and Richard Brown from British Seed Houses and John Bailey from Cargotec, who become the first affiliate members to sit on council.

During the meeting, TGA Chairman Tim Fell presented a decanter to David Davies who has stood down from council after 13 years' service. David, who retired from turf production last year, now runs Early Turf Systems, a distributor of Conwed turf netting and will continue his involvement with the association as an affiliate member. 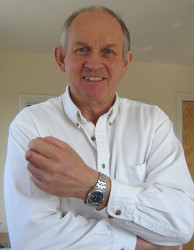 The association's Chief Executive, Tim Mudge, commented: "We're delighted that the association continues to expand. The inclusion of two affiliate representatives on the TGA council means that turf industry companies who make such a significant contribution to both the advancement of UK turf production through their work with growers and to the association, have their say on the way the association moves forward."

"We're sad to see David Davies stand down from the council. He's made a significant contribution to its work over the years, especially to our soil project which included research with Royal Holloway and Cranfield Universities into the effects of turf production on soil structure. We're pleased he'll retain his involvement as an affiliate member. "

David said that he had gained a great deal of knowledge through his involvement with the TGA and had always found its meetings, shows and visits extremely interesting and enjoyable. "I believe that all turf growers and associated businesses benefit from membership of the TGA through the shared knowledge, co-operation and excellent promotion of the turf industry. I would urge all turf-related companies to consider joining."

Photo caption: David Davies who has stood down from the TGA council after 13 years' service.