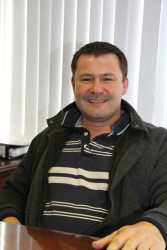 Borrowing and changing the words (slightly) from Queen Elizabeth II; 2012 is not a year on which I shall look back with undiluted pleasure. In the words of one of her more sympathetic correspondents, it has turned out to be an Annus Horribili!

Two of the major culprits (weather and economy) have conspired to provide perhaps the worst year for our industry in a very long time. The expectations that we all had in March of a fantastic, long, hot and dry year didn't just evaporate, it became submerged under monsoonal rainfall. The saturated soil simply couldn't cope and flooding ruined a summer of sport for many.

Of course, sport at the top end just about muddled through - Test and County cricket, Pro-golf, Wimbledon and the Olympics. But, at lower levels, the poor weather created major financial issues that will reverberate for a long time to come.

Even those with the resources to cope with average inclement weather succumbed to the relentless moist air weather systems brought up from Southern Climes by the higher than normal (latitude wise) Gulf Stream.

The new Wimbledon roof was the saving grace for the tournament, with games played well into the evenings to allow the backlog to catch up. The national press offered headlines such as "Wimbledon facing another wash-out week as July promises to be soggy" and "A second week wash-out as a soggy July follows the wettest June for nearly 250 years".

Ascot didn't fare much better, the Daily Telegraph led with "Royal Ascot Ladies' Day racegoers brave the rain" but, in the same news, there were twelve severe flood alerts as we headed into July!

The Sporting Life led with this in May; "Two more jumps meetings have been claimed by the weather with the loss of Stratford on Wednesday and Newton Abbot on Thursday because the tracks are waterlogged. Course officials called off the Stratford fixture after 21.4 millimetres of rain fell on Monday night. The Warwickshire circuit has now had to withstand 175mm of rain within the last thirty days".

In cricket, there were regular headlines throughout the summer, such as "Day one of third Test abandoned" and "First day washout dents West Indies preparations at Sussex". In fact, Stuart Kerrison, Head Groundsman at Essex CCC remarks in an article in this issue about how the Press have honoured the first class groundsmen this year with the much coveted Peter Smith Memorial Award, for services to the presentation of cricket to the public, and richly deserved it was.

Whilst motor racing tends to continue in any weather, the torrential downpours prevented many tens of thousands of spectators gaining access to Silverstone to watch the British Grand Prix; another news headline read "Silverstone washout sparks chaotic scenes".

And all the above before we start to talk about the impact this has had on bowls, cricket, golf and tennis at the lower levels. I have visited cricket grounds this year that managed just four full days of cricket!

The usual revenue streams of subscriptions, bar and food takings have simply not been there, and this is now leaving many clubs teetering on the edge of financial ruin, reliant entirely on members with deep pockets and volunteers to help pull them through.

The lack of money spent by players and spectators this year, has meant that cuts are having to be made. Members of staff are having hours reduced or, worse still, losing their jobs. The playing surfaces are suffering because less money is available to repair them and, in many instances, remedial and end of season works were canned completely in 2012. All of which doesn't bode well for next year.

Even the successes of the Olympics seem a distance away now. The 'legacy' that everyone talked about cannot succeed without money, and that appears to be in very short supply.

All of the above is, however, minutiae in comparison to real life because, if you are reading this latest copy of our magazine at the start of 2013, then the world didn't end as prophesised, and we can hopefully look forward to a much more positive year.

Have a fantastic New Year!