by Chris Roberts
in Consultancy and Golf
on 11 Oct 2014

Good playing surfaces are a prime requirement for golf clubs to attract and retain members and, without that in place, members will start to chunter and the word will be out.

Many golf courses are under increasing pressure to retain and attract new members as well as sustain or even increase their visitor income. As a result, the need for good quality all year round playing surfaces has never been more important. However, this pressure to constantly produce undisturbed surfaces often means that thatch levels can rise and have a dramatic impact on medium to long term playing conditions.

So, how do we reduce or maintain thatch levels with only minimal disruption to play? In this article I will concentrate on the work that has been carried out at Sandwell Park Golf Club in the West Midlands to reduce their thatch level, without the need for major disturbance to play.

Physical examination of the soil profile

My work began at Sandwell Park in 2009, when the club's committee wanted firstly to concentrate on the condition of the greens and their all year round performance. I'd been told that there had been little thatch management for a number years. So it was no shock that a physical examination of the soil profile indicated significant thatch accumulations in the top 40mm of the soil profile, and excessively so in the top 25mm where a dense thick band of yellow thatch was clearly visible.

Under these organic accumulations was approximately 75mm of relatively clean rootzone. This then gave way to the heavy clay base of the green.

These large accumulations of organic matter (thatch) were having a dramatic effect on the playability of the greens, especially in periods of heavy rainfall. This, coupled with footfall, resulted in uneven, foot-marked greens that were not conducive to producing a quality putting surface.

After a physical examination of the greens profile, it was decided to carry out a loss on ignition test on three greens in 20mm zones to a depth of 80mm. These tests would give us a tangible benchmark of the amount of organic matter within the greens and where it was within the soil profile. From these tests, targets could then be set for its reduction. The three greens chosen were perceived, at the time, to be a standard, a wet and a dry green.

The results, not surprisingly, confirmed that all the greens had high organic content within the top 40mm of the soil profile. All three greens had between 10.4% and 14.5 % in the top 20mm, while the zone between 20mm and 40mm held between 9% and 11.6% organic matter. Below this, there were only slightly raised levels with approximately 7% organic matter. Now we knew, relatively accurately, how much thatch we had and whereabouts in the rootzone it was positioned. From these results, a target level of 4% organic matter was set for all zones, however the top 40mm was to be our main focus.

The first part of any thatch reduction programme must be to slow the volume of organic matter being produced. One of the main contributors to thatch is shoot and stem growth. To ensure that stem growth was not excessive, nitrogen inputs were evaluated and it was decided to deliver nutrients in a much more controlled manner. This was done by spoon feeding the greens with liquid fertilisers and seaweed, rather than applying nitrogen rich granular fertiliser. Applying nitrogen rich granular fertiliser would only create growth spikes, resulting in excessive shoot growth and thus exacerbating the problem.

Apart from helping to reduce thatch accumulations, verticutting was having a beneficial impact on the smoothness of the putting surface by thinning any tufted growth.

With fertiliser now being applied in a more controlled manner, and verticutting helping smooth the surfaces, the greens, in the short term, started to perform much better. These short term improvements to the putting surfaces reassured the membership that the management team could produce better surfaces. This was going to be important, especially for the times when disruption was inevitable. The underlying problems, however, still remained and, if the greens were subject to any sustained rainfall, the surfaces would deteriorate once more.

Starting to dilute the thatch

Topdressing is a key part of any thatch control and reduction programme. If we were going to reduce the amount of thatch with minimal disruption to play, then regular light topdressings were going to be an integral part of the programme. Before I arrived at Sandwell, the club had been advised to switch to a straight sand dressing, compatible to the dressing mix they were using previously. The move to straight sand was one that I had no intention of reversing, as the moist sand was going to be considerably more cost effective than kiln dried mixed topdressing that had been used. I understand the fors and againsts of using straight sand. However, significant thatch levels require significant amounts of dressing and, in this case, the cost implications were too great to ignore.

With high thatch levels like the ones at Sandwell, it was estimated 150+ tonnes a year would have to be applied. I have heard many people talk about burying thatch to levels that can't be reached by hollow tining or deep scarifying by applying high volumes of dressing. However, this is something that I have never witnessed and, by carrying out the loss on ignition tests in measured zones within the profile, it could be shown that this was not happening at Sandwell Park.

There are obvious cost implications of applying these amounts of topdressing. However, topdressing is one of the only materials applied to a golf green that has residual value in the form of aiding drainage. 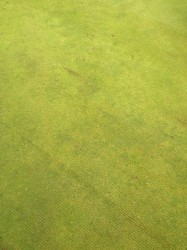 Aeration was going to be another key component in the thatch reduction programme. By getting air into the thatch, soil life would be increased and this, in turn, would help break the thatch down in situ. By breaking down the thatch within the soil profile, locked up nitrogen started to be released, and the greens would start to self feed. This self feeding would mean a reduction in nitrogen inputs, and a small cost saving could be made.

Initially, solid tining was carried out in the summer and slitting in the winter. This type of aeration also started to allow the migration of topdressing into the thatch layer and this, in turn, would further accelerate the decomposition of the thatch.

It was clear from the start that not all the thatch was going to be broken down in situ, especially in the densest layer from the surface to 20mm. Because of this, there was going to be a need for thatch removal. I often advise thatch removal on greens with higher than 10% organic matter within one zone of the soil profile. Greens with excessively high organic matter content, i.e. higher than 10%, often have poor soil life and sit wet for long periods. Therefore, even when aeration is carried out, such as slitting and tining, the soil life populations remain low due to the hostile environment.

So, it was decided to remove the thatch by deep scarification as this was the most efficient way of removing it, with 2mm tines at 25mm spacings hitting approximately 9% of the surface area, compared to approximately 4% of the surface with 15mm hollow tines at 50mm centres. Once the scarifying debris was removed, the greens were dressed with 40 tonnes of sand.

On the more free draining greens this process worked well. However, after heavy rainfall, it was clear that the wetter greens had actually become more unstable and, in places, the turf started to split. Fortunately, this work was carried out in late August so, once the greens had a spell of dry weather, they increased in firmness and repaired well.

However, this temporary softening of the surface was a concern and I felt uneasy that the deep scarifying slits were not all the way through the thatch layer. Instead, water was discharging into an organic rich rootzone. Therefore, it was decided that the best form of thatch removal was going to be hollow tining. The hollow tining would allow us to easily punch through the thatch layer down to much freer draining rootzone. Although not as efficient as the scarifying, the hollow tining would be a much safer form of thatch removal at Sandwell Park.

The hollow tining also allowed us to put on 70 tonnes of dressing compared to the 40 tonnes when scarifying. This brought the annual 150 tonne target well within reach. With a good fertiliser, verticutting, topdress and deep aeration programme the thatch started to reduce. This could be seen both physically and by the loss on ignition test.

However, the problem with both of these tests was the ever changing ground conditions due to varying weather. These results, although interesting, could not be used to back up our progress on the thatch reduction programme.

Therefore, the loss of ignition thatch test became the stable barometer in which we tracked our progress. The tests started in 2009 and continued annually, indicating approximately where the thatch was within the soil profile. These tests, however, were only a snap shot of what was going on beneath the greens. So, rather than concentrating on any possible small anomalies, we were looking for a general trend of thatch reduction within the top 40mm.

Because of possible small anomalies in the results, the information we gave the members put two 20mm zones together. So, rather than the 4% target in each 20mm zone, we set a target of 8% combined organic in the top two zones.

With the end in sight

As the graph clearly shows, the thatch at Sandwell Park is reducing well and the target of 8% organic matter within the top two zones not far from reach. It's been decided that, in 2014, only the softer areas of the greens will be hollow tined. The remaining will continue to be reduced by less disruptive methods such as verticutting, dressing and solid tine aeration.

The thatch testing will continue on the greens, even when the targets are met, to ensure that thatch is kept at appropriate levels.

Although Sandwell's thatch levels were significant, they are far from unique. With many clubs still having higher than desirable thatch levels, greens performance will continue to be compromised.

Formally the Course Manager at Ludlow Golf Club for nine years, Chris Roberts set up his own golf course consultancy business in 2007. The business provides independent consultancy on all aspects of golf course management. Since then Chris Roberts Agronomy has steadily grown and now boasts a healthy portfolio of regular client, ranging from Championship to smaller golf courses.
Email: chris@cragronomy.co.uk
www.cragronomy.co.uk