Abridge Golf and Country Club, like many other south eastern Essex courses, has suffered from the extreme heat and dry weather of last year's summer. In particular, their fairways took the brunt of the heat wave with many areas of grass dying back.

Large accumulations of thatch were the main problem. Once these thatch layers dried out they became impervious to water, increasing stress on the grass plant. Thatch layers were found to be in excess of 50mm deep.

The Head Greenkeeper, Geoff Smith, was well aware of the problem, as thatch control had not been carried out on the fairways for over three years.
In the past, the club had employed Peter Knight of Bury Turfcare, to hollow core the fairways, on an annual contract; this kept thatch content down while, at the same time, increasing soil porosity.

When Geoff gained promotion to Head Greenkeeper, he recommended that the club evaluate the situation and consider another method of removing the thatch.

His idea was to use the Koro Fraise mower, on every fairway once a year for the next five years.

Having gone out to tender, Peter Knight again won the contract and work began last summer.

Enlisting the help of Phil Armitage of the STRI, and also Craig Brisley of Collyers, they finally came up with a programme of work.

Setting the machine to remove 20-25mm of material using 3mm blades at 40mm spacings, two tractor-trailer units were utilised to keep the Koro working, while a third person followed up with a Bema brush to leave the surface clean and tidy. Peter used his 1.2 metre wide Koro which was able to cope with the undulating fairways better than his wider machine. 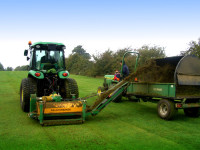 Fourteen fairways were completed in two and half days and proved to be a cleaner and more efficient method than the previous hollow coring technique undertaken. All the thatch debris was deposited around the course for composting.

To complete the cleaning up programme all the fairways were then verticut and mown.

Once the Koro work had been completed, Geoff and his team overseeded and topdressed the fairways putting on 30 bags of Barenbrug pure ryegrass seed through Peter Knight's Charterhouse disc seeder.

Geoff has been delighted with the results. The efficiency of the method, and the way everybody pulled together to ensure there was little inconvenience to the members, has been fantastic. Coupled with the fact that the club has fully supported his decision to try this method over a five year period again acknowledges the commitment of the club to improve the condition of the course.

The Koro's success has been well documented over the past few years. Geoff's willingness to try out this method on his fairways appears to be quite brave and only time will tell if it was the correct decision. Certainly, the early signs are very encouraging.


New turf maintenance technologies are being introduced on a regular basis. Often the opportunity to use them is down to the courage and conviction of the Head Greenkeeper or Groundsman who, in most cases, has to convince the club of the benefits.

Abridge Golf Club, and Geoff Smith in particular, have taken a bold step. There will be many interested parties waiting to see the results of this renovation and what benefits it will bring in the long term.