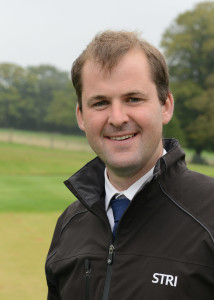 Golf greens currently contain surface thatch levels on average 60% higher than is desirable for optimal turf health and playability. And that average masks some parkland courses with more than 25% organic matter in the top 20mm, compared to a target of four to six percent, according to STRI reports.

Scottish-based STRI Agronomist, Richard Windows, highlighted the latest figures included clubs that have been following the STRI Programme, where they have made great strides to reduce levels of organic matter and benefitted from significant improvements in surface firmness and reduced disease pressure.

"However, where we get new clubs joining the Programme, we typically find that thatch levels are far higher," he warned. "Excess organic matter retains greater moisture that leads to surface softening and increased disease pressure."

Even links courses were found to have up to 12% organic matter extending down to 40mm from the surface, with an average 7% in the top 20mm that is still 40% above the target level.

Rod Burke of Syngenta advised that high levels of thatch in greens surfaces poses a serious risk of earlier and more severe disease outbreak this season. 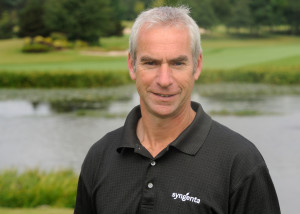 "Organic matter provides the ideal conditions for the spores of Microdochium Patch (Fusarium) to survive. As soon as conditions are triggered by rainfall or even damp dewy mornings, then infection can quickly break-out.

"Targeting spores in the thatch with well-timed proactive Medallion TL applications can help to reduce disease pressure and to protect the leaf surface from infection," he said. "The aim is to minimise disease pressure as early as possible. Results have clearly shown that going into the winter with clean turf gives the greatest chance of coming out with clean surfaces and better playing conditions in the spring."

The fludioxonil in Medallion TL is the only Contact+ active targeting disease in the thatch and on the leaf surface. The long-lasting results gives greenkeepers confidence and peace of mind that turf is safely protected through difficult conditions. 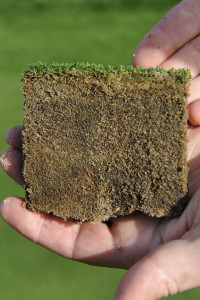 "Loss of turf quality from disease attacks in the autumn has the most serious impact on playing surface performance for golfers, since the slow growing conditions offer little chance of recovery for months over the winter. Effective protection now is paramount for player satisfaction for the rest of the season, particularly over the time when annual membership fees are typically due," he pointed out.

Mr Burke advocated the long-term reduction in organic matter is an important element of an Integrated Turf Management (ITM) approach. "But we recognise that, in practice, many greenkeepers are constrained by budget costs of intensive remedial measures and the interruption in play from that can affect short-term playability and club revenue."

Richard Windows reported parkland golf courses following the STRI Programme of targeted aeration and amelioration for the past three years had seen organic matter levels in the top 20mm fall by over 13%, and nearly 17% reduction on links course greens.

"Allied to the reduction in organic matter, the firmness of the parkland greens improved by more than 16% over the period, along with a 7% increase in green speed. The smoothness and trueness of the greens - which we know is a key desirability for players - was also markedly improved," he added.