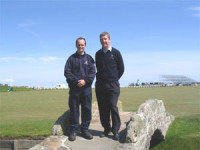 In July, The Open Championship will be returning to the Old Course St. Andrews for the 27th time. On Sunday July 17, we will know which one of the 156 participants will be presented with the Claret Jug. Obtaining this accolade at any Open is an awesome achievement, but it is always considered a little extra special at the Home of Golf. In 2000, Tiger Woods described winning at St. Andrews as the 'ultimate'. It is very hard to disagree.

The Old Course is a true sporting Mecca. Any golfer lucky enough to play across the fantastic links has played golf in its most natural environment. This has been epitomized by Arnold Palmer who described playing on the Old Course as 'golf in its purest form' and 'seemingly untouched by time'. While the 'Old' has been shaped by nature, it would be false to say man had no influence over its evolution. For instance, in 1764 the number of holes was reduced from 22 to 18 and in 1864 Tom Morris (on his return from Prestwick) widened the fairways and greens.

In fact, Tom Morris played the most significant role in shaping the Old Course into what we see today. As four times Open Champion himself, he was obviously a decent player! Like so many other Scottish greenkeepers, he quickly learned the fine bent and fescue grasses produced the best turf surfaces for golf. To retain these grasses he kept fertiliser and water application to a minimum and implemented regular deep aeration and sand top dressing.

These basic principles of turf management continue to underpin the course management programme adopted by the current Head Greenkeeper, Mr. Euan Grant. Pesticide and fertiliser application is minimal with only 20-25 kg/ha of nitrogen being applied to the greens on an annual basis. Irrigation is only used to keep the turf alive. Deep aeration is carried out regularly, using the Verti-drain during the close season and the HydroJect (water injection) through the spring and summer. Mowing heights are kept at approximately 5 mm with surface refinement operations including light top dressing, rolling and occasional verticutting being achieved regularly to provide smooth surfaces. Appropriate pace is generated due to the fine texture of the turf and firm underfoot conditions. The only aspect of maintenance that has changed over the years is the quality of machinery used to implement the various operations and the frequency in which they are conducted. 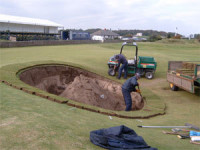 The fairways across the Old Course are superb examples of links surfaces. They are firm underfoot and support an excellent fine and wiry texture. Regular sanding and verticutting is implemented to retain such surfaces. As growth rates are so slow on the Old, the recovery from divot damage is slow. Therefore, like so many other links courses, fairway mats are used each winter. To help increase the rate of recovery across popular landing zones, old divots are replaced with fresh patches of turf rather than the usual soil and seed. It is not unusual for the greenstaff to patch as many as 10,000 divots over the winter months!

Since the Millennium Open, the tees on 2, 4, 12, 13 and 14 have been extended backwards, increasing the length of the Old by 164 yards. It now measures 7,279 yards from the Championship tees, with the 14th now being the longest hole on the Open rota. As the existing hazards on the Old cannot be moved, it was necessary to move these tees further back, thus bringing the likes of Cheape's bunker on the 2nd and the Beardies on the 14th back into play. It will certainly be interesting to see how the players cope with these exciting new challenges. 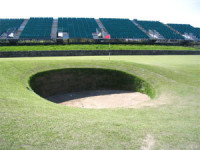 As we close in on July 14, the world's best golfers and sporting media will descend on the historic Auld Town on the East Coast of Fife. This in itself should wet the appetite for all golf enthusiasts around the world and indeed get the hair standing up on the back of your neck. It does for me. I don't know why. Perhaps this quote from Seve explains it well: 'Victory anywhere is always sweet, but to win at St. Andrews is so special, it rises above anything else'. Bring on July 14…

Photos (Others): The famous Road Bunker under construction (right) during the 2004/2005 winter, with the finished article ready for the Open (left).