0 The 2015 Wimbledon Championships by numbers 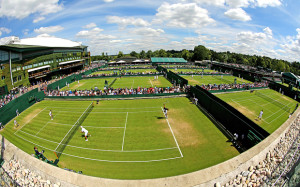 This year's Wimbledon championship is set to get under way on Monday 29 June, with over 40,000 fans expected daily.

Former Wimbledon champion Lleyton Hewitt has also been given the wildcard after only winning one match this season, yet Laura Robson (who has has not played since the 2014 Australian Open) has failed to obtain a place in the tournament draw.

Hopes will be high that Andy Murray will once again lift the Wimbledon trophy after winning in 2013.

However French Open champion Stan Wawrinka played down Murray's hopes of a second triumph on home soil this summer, tipping Novak Djokovic to retain his title.

Whatever the outcome, Wimbledon will remain one of the biggest fixtures in the summer sporting calendar.

To watch the video to find out the numbers behind the world's greatest grass court tennis tournament, visit here.