by Rob Jones
in Football and Synthetics
on 09 Feb 2014

1 The Accies score with Tigerturf UK 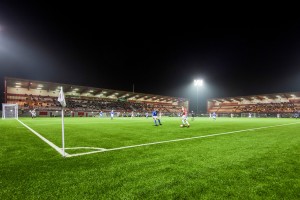 When Scottish football club, Hamilton Academical FC experienced a series of winter fixture postponements due to adverse weather conditions, the Championship outfit decided to explore the possibility of installing a synthetic playing surface.

The north facing pitch at the club's New Douglas Park stadium had suffered from prolonged exposure to Scottish winter weather, which, when coupled with a demanding fixture schedule, caused rapid deterioration of the natural playing surface.

This wear had detrimental consequences for both the performance and aesthetics of the pitch, which would not only affect the performance of the first team, but would also prevent the club from making its pitch available for third party community use.

High performance all year round

The new pitch had to be suitable for use all year round so a product which promised high performance, durability and longevity was essential. Following an extensive tender process under an FF/FA/RFU framework agreement, leading synthetic turf manufacturer, TigerTurf UK Ltd, collaborated with Chieftain Contractors, to manufacture and install a high performance football pitch at New Douglas Park.

TigerTurf's reputation within the sports industry coupled with its range of high performance products and ability to deliver innovative bespoke solutions made them the best fit for the project.

The system chosen for the installation was TigerTurf's Total Turf 60XQ, which is a leading multi third generation (3G) surface consisting of two unique profiled fibres, which is part-filled with sand and rubber infill. 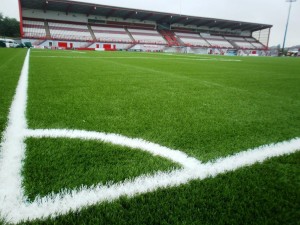 nts of the system combine to provide unrivalled split resistance, along with improved performance, durability and visual characteristics.

In addition, with New Douglas Park also playing host to elite level rugby, the field had to be fitted with a 23/130 shock pad, which gives the critical fall height protections needed to maintain the required safety standards.

Faced with a very short lead time, TigerTurf produced the pitch in 3 weeks, during which Chieftain were preparing the base works for the turf to be installed. From tender to the completion of the installation, the project took just 5 weeks in total - a delivery time which was made possible thanks to the co-operation between all involved parties.

Whilst the fact that the delivery and installation of the new playing surface was required in time for the start of the 2013/14 Scottish Championship season was a challenge in itself, the surface also needed to be tested to FIFA standards by an independent test house in order to meet the desired performance criteria.

This added an additional hurdle, which was overcome thanks to the manufacturer's wealth of experience in meeting sports-specific testing requirements.

On completion of the £400,000 installation, Shaun Fagan, Commercial Manager at Hamilton Academicals FC commented: "Although we had very particular requirements, TigerTurf was able to interpret the brief we supplied and exceed our requirements with the delivery of the synthetic turf system.

The product itself, Total Turf 60XQ, alongside the additional bespoke anti-flood measures will ensure that we will be able to use our facilities all year round, giving us the potential to increase revenue, much happier fans and a better training/playing ground for our players. It will also support us to continue the projects we engage in with the local community, which is very important to the team at Hamilton." 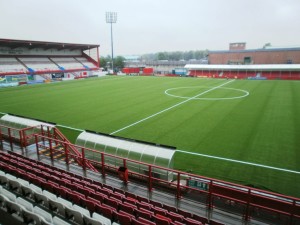 aul Langford, Managing Director at TigerTurf added: "We are really proud to have completed our first artificial stadium pitch in Scotland and that the club is happy with the end result. Each of our sport systems is produced to the highest standards and to the client's brief, which allows us to offer robust guarantees based on playing hours, that provide assurances over the longevity of performance."

Since the summer installation, Hamilton Academical's performances have gone from strength to strength, with the Accies currently sitting top of the Scottish Championship table.

The New Douglas Park outfit will be hoping that their brand new playing surface proves to be their signing of the summer in a title-winning campaign.