0 The Ageas Bowl - Not so simple for Simon

The Rose Bowl, or as it is more commonly known The Ageas Bowl for sponsorship reasons, is a cricket ground and hotel complex in West End Southampton, Hampshire. It is the home of Hampshire County Cricket Club, who have played there since 2001. Phil Helmn MG met with Head Groundsman Simon Lee to learn about his 'difficult' introduction to the role thanks to Covid-19. 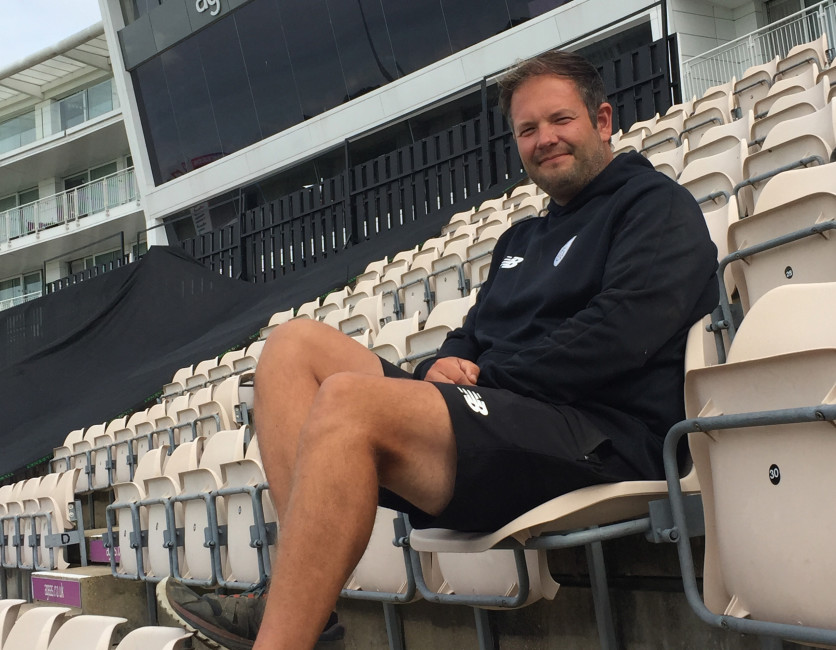 The Rose Bowl was originally constructed as a replacement for the County Ground in Southampton and also the United Services Recreation Ground in Portsmouth, which had been Hampshire's homes since 1882. Hampshire played their inaugural first-class match at the new ground against Worcestershire on 9th May 2001, with Hampshire winning by 124 runs. The new ground has since hosted a wide range of high profile games from International cricket, including One Day Internationals, matches in the 2004 Champions Trophy, Twenty20 Internationals to full Test matches in 2011, 2014, 2018 and 2020. The Ageas Bowl also played host to the inaugural final of the 2019-21 ICC World Test Championship between India and New Zealand earlier this year, resulting in the Black Caps being crowned inaugural World Test Champions.

Besides the main cricket ground at the Ageas Bowl, an additional satellite ground borders the main ground to the south-east known as the Nursery Ground. It hosts Hampshire Second XI matches at the Hampshire Academy in Southern Premier Cricket League matches. Its end names are the Northern End and the Golf Club End. Its pavilion is named after Arthur Holt, who coached Hampshire from 1949 to 1965. The Nursery Ground has hosted one first-class match, Hampshire v Loughborough MCCU in April 2013.

The cricket academy, which has six lanes of cricket nets, is used by county squads, the Hampshire Academy, cricket clubs and schools. It is known to have some of the best facilities of its kind outside of Lord's and is available for hire by the public. There are two new stands which include permanent catering facilities, which can be used for conferences and exhibitions outside of match days. The stands are named after two of Hampshire's most popular captains, Colin Ingleby-Mackenzie and Shane Warne.

Also, part of the Ageas Bowl complex is a large David Lloyd Health and Leisure Club which opened in 1982 and, more recently, the Boundary Lakes Golf Club, an eighteen-hole golf course which opened in 2017. Head Groundsman Simon Lee has been featured in this magazine over the years but, for those unfamiliar with his journey, Simon is a multi-award-winning groundsman who started his career at Somerset County Cricket ground in 1999 and rose through the ranks to become head groundsman ten years later. Simon can boast (although not his style) the honour of having won back-to-back ECB Groundsman of the Year awards for one-day cricket and perhaps, through his square preparation skills, helping to produce spin-friendly wickets which helped Somerset finish second in the Championship in three of the past four seasons. After being associated with Somerset for twenty years, Simon made the leap to become the head at The Ageas Bowl in Southampton back in January 2020 taking over the reins from Nigel Gray. Simon recalls, "I'm a Somerset boy by heart, so it was a massive decision to make. I could have happily stayed with Somerset as there was no particular reason to leave. But opportunities like this don't come around very often, especially with such a big site and the chance to improve somewhere which is an international ground."

So, there we are, the stage was set as Simon embarked in his new role on January 2nd, 2020 but, before he could really find his feet (especially as it was such a pretty wet and miserable January and February), we all know what happened next - BANG - Covid hit and gripped the country (well the world really) and turned all our worlds upside down!

"I remember being called in to meet the management at the club and being told that everyone had quite literally to drop everything and go home" Simon recalls. "There was no real warning and I remember trying to explain that, as it was the third week in March, the grass growth was just beginning to take off."

From that meeting, the club decided to keep Simon and his deputy, Tom Cowley, on site so they could manage the grounds whilst everyone else was placed on furlough. "We went from five full time staff and six seasonal helpers down to just the two of us," explained Simon. "It was tough for us all, the guys having to stay at home and the pair of us to trying to keep on top of all the cutting". Simon explained that, for April and May, he wasn't able to undertake any of his usual pre-season renovations or preparations. "We dared not apply any fertiliser as we knew we simply wouldn't be able to cope with the extra growth," reminisced Simon. "As there were only two of us, we couldn't even move the covers as they were so heavy! Therefore, I couldn't control the environment on the wickets (I couldn't keep rain off or moisture in) which I found frustrating. We had to pray the weather was kind and water by hand if needed. It was purely cut, cut, cut solidly for two months."

Simon did, however, manage to convince the board that their training ground was in desperate need of renovation and that it would be a most opportune time to call in a local contractor to carry out the works. Southern Ground Care were tasked to Koro the entire area to a depth of 18mm (which effectively removed all the existing thatch layer), verti-drain and graden the base, incorporate 90 tonnes of sand into the remaining profile, apply a preseed fertiliser at 35gms/m2 and finally overseed with 50 bags of Johnsons intense rye.

"The guys did a tremendous job for us" explained Simon, "We had germination in just three days, hand rotary cutting in two weeks and cylinder cutting in four - amazing!"

Whilst all this was going, Simon was aware that the ECB might have some ideas on kick starting games again as the press were talking about the possibility of the ground being used as an experimental 'COVID bubble' for test cricket. 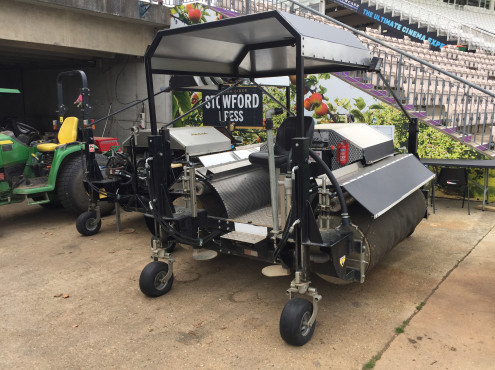 Fast forward to June and the announcement was made that the Ageas ground was indeed to be used as one of two bio-secure venues, alongside Old Trafford, for the England tours involving West Indies, Pakistan and Ireland which were forced to be regulated due to the pandemic.

"As soon as we heard the news that we were to be used to host Test cricket, we called all our team back in to work and began preparing as best we could," Simon explained. "The ECB 'loaned' us a further five staff from cricket grounds around the country to help, and we all stayed in the hotel in our team bubble to avoid contamination. Working under the COVID protocol rules was extremely difficult for everyone, we were especially aware that we couldn't work within twenty metres of the players who were also staying in the hotel and using the training areas to practise prior to the matches." Simon recalled.

"Everything took twice as long to complete, and time wasn't on our side. I effectively became the COVID manager throughout as well as the head groundsman. I had to make sure people didn't share vehicles or tools and that everyone wore their masks and sanitised equipment before and after use. We were heat tested daily and PCR tested every ten days; it was tough," Simon went on. "However, I am very proud of my team and their efforts, we not only coped with all that pressure but delivered excellent surfaces in rapid time and no one in our team or the playing teams suffered from the virus during that period."

Simon and his team successfully produced first class surfaces in time for the first match between England and the West Indies on 8th July, and the subsequent England matches against Ireland, Pakistan and Australia throughout the rest of July into September.

I had an amazing time chatting with Simon about his time since joining the Ageas Bowl. I was especially fascinated talking with him about wicket science and pitch management. It also struck me that all groundsmen are not only responsible for the maintenance of the 'hallowed turf' but play an equally pivotal role in the club's fortunes. Simon helped me understand that groundsmen's success is directly and intrinsically linked to great communication to all stakeholders ,which helps ensure success for the club.