by Charmian Robson
in Machinery & Mechanics, Industry News, and Football
on 09 Aug 2016 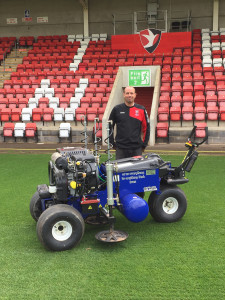 Cheltenham Town Football Club head groundsman, Matt Utteridge, has purchased an Air2G2 GT Air Inject from Campey Turf Care Systems, to relieve compaction on the Whaddon Road pitch, with a wealth of other practicalities presenting themselves at the 2015/16 National League Champions.

A 3-1 win against Lincoln City on the final day of the season meant The Robins broke the 100-point barrier, as they made their way back into League Two at the first time of asking. But the pitch they play on is maintained by only Matt, who also has to maintain a seven-hectare training ground.

Matt has been a greenkeeper for the last 20-years and has only been in his role at Cheltenham Town F.C for six months, with every ounce of his vast turf knowledge needed across both sites, he knew there were some damper areas of the stadium pitch that needed addressing.

The second site boasts four full size pitches and four junior pitches, and with only one other member of part-time staff for help, Matt's time is extremely precious, making the Air2G2 the perfect machine, as he explains.

"We used to have a Verti-Drain and a tractor, but because Whaddon Road had a tendency to be a bit wet I became very restricted on when I was able to use it, which was made even more difficult by time restraints.

"So, the Air2G2 really did fit the bill in that respect, because I can take it out regularly, and even if the pitch is a little soft you can still get out there and use it, which for me was really important.

"We wanted to tackle some of the damper areas of the pitch and relieve any compaction that might be causing it, and the machine has done a great job of that.

"It made a real difference on the top corner of the pitch, I was using it every day of the week just to get the air through the root zone to help encourage the drainage.

"We plan to use it on both sites and that's the great thing about it, it's a lot easier to transport than a tractor and machine, so it speeds that side of things up for us."

The decompaction that Matt has seen work so well comes from the machine injecting compressed air directly into the root zone through the three probes. Depending on the fittings the air can go either 7" or 12" deep, spreading horizontally and vertically over five-foot. This produces a fracturing effect in the compacted root zone, with no surface disruption.