0 The Allianz Arena - the scene of Chelsea's Champions League triumph 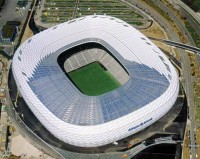 To be in the final of the Champions League, in your own stadium, is something special for any team! The fact that FC Bayern Munich began the match as hot favourites, and with the entire German football nation shouting them on (for this one occasion at least!), may have weighed heavy on them, as they eventually lost out to Chelsea.

Of course, Bayern were the better side, had more shots on goal and 65% of the possession, but it's a bulging net that counts, and the south Londoners won 4-3 on penalties, giving them a route into this season's competition.

With an estimated 200 million television viewers worldwide, the Champions League Final is the showcase event for club football in Europe. The venues are selected two years in advance, and it was purely by circumstance that FC Bayern Munich reached the final when it was scheduled for their home ground, the Allianz Arena. Of course, it may well have provided additional motivation.

Bayern are no strangers to the final, having won the trophy four times and been runners up five, the most recent being this year!

Charged with presenting a playing surface fit for the final was Head Groundsman, Uwe Lienau, and his colleagues Alexander Hoeferlin and Arndt Valbert.

"The pitch was laid in June 2011 by contractors Pfeiffer," explained Uwe. "It had played well all season but, in the sixteen weeks before the final, nineteen matches and three training sessions took place."

This very high usage is due to the fact that two clubs share the stadium as their home ground, the other being TSV 1860 München (the Lions) who play in the second tier of the Bundesliga, Germany's national football league.

As well as the Bundesliga fixtures, Bayern's Champions League home matches also put a strain on the surface.

That it was possible at all is a true reflection on the impressive work of Uwe Lienau, and his colleagues and, ultimately, left the team under two weeks to prepare for the final.

I am told that the gentlemen from UEFA are most friendly, but are also quite critical when it comes to assessing the quality of the pitch quality ahead of the game.

"With such a tight schedule we knew that we each had to give 110% effort," said Uwe. "Just turning up to work was never going to be enough. Such a tight schedule required expert handling of the surface through the second half of the season, as we knew we only had a short regeneration time at the end of it."
"Therefore, it was most important to use the time between games as effectively as possible. Postponing a match or using excuses would never have been acceptable!" 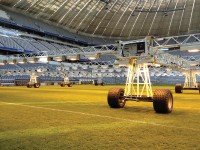 "I have, of course, many technical options, such as lighting rigs and aeration machinery," Uwe explained. "Without them, we would never be able to provide a decent playing surface, but these options cannot be used continually, or at any time," he added.

"A good example is that the lighting rigs cannot be used during, or shortly after, heavy rain. Only when the pitch has dried out sufficiently is it possible to drive the heavy units onto the surface. If used too early, track lines and thickening of the grass can occur," explained Uwe. "If you get only one week's regeneration time after a rained out game, with cool weather conditions and cloudy skies, or additionally, "English weather", as is usual in April, then even the best technical support is no use if you cannot get onto the pitch!"

"Throughout February the leaves of the grass were still frozen, even after using the undersoil heating. With the rigs I could still ensure continual growth," he explained, "but the grass remained very susceptible to strong frosts as they were always 'juicy'."

"Also, the lighting rigs require at least forty-eight hours to be effective. It takes a further 2½ hours to put the units in place, so it can become a bit of a lottery as to when to use them, especially with the weather conditions becoming more unpredictable. I simply had to rely on my experience," he said.

Uwe can aerate up to a depth of 16cm in the stadium. With this, he will reach the all important drainage layer, although such aeration can only be done with a maximum of 8mm tines, as greater diameters or longer ones are not possible due to the short regeneration time, as well as the pitch heating.

"Deep aeration, with soil exchange, can only be done once a year," he explained. "We have to act quickly and be flexible, and you need to have the right people." In addition to his two colleagues, he relies on the support of a contractor who supports the team with four additional staff as required and, on match days, a further six.

Uwe is renowned for remaining calm, even in the most trying of situations, but there was some surprise when he allowed a probationer (apprentice) to cut the pitch just before the final, even though he had undergone intensive training. "That was a great thing to allow a young and dedicated Bayern fan to be able to do," Uwe said, with a smile.

"If the weather conditions don't follow a traditional pattern, as was the case from time to time this spring, it can play on your mind, You can actually see the pitch quality deteriorating, and you know that the regeneration phases for the grass will not increase in the near future," he added. "The month before the match, we pulled out all the stops to achieve the pitch quality requested by UEFA. There were some intense moments, and there were still four league matches to be played in the stadium."

Independent from this, each side was to be allowed one full day's training in the stadium before the final.

During the final month, granular fertiliser was applied twice, the pitch was aerated once and twenty-four tonnes of topdressing was added. The lighting rigs were used up until three days before the final. The grass in both goals was relaid and, from the 7th May, it was cut daily, sometimes twice, with a Dennis G860. The height was set at 25mm at first, but reduced gradually to 23mm. On the day of the final, the lines were overmarked twice.

"You cannot imagine how many people required my attention during this time, all needing me to provide information," confirmed Uwe. "Here's a 'short' list of the additional installations which, at some point in the week prior to the final, required the assistance of my team."

"All this had to be built, connected and installed at some stage," explained Uwe. "Yet we needed to be able to continue our work without too many interruptions, so a 'pitch activity schedule' was put in place in mid-April, and there was a strict timetable detailing who was to be allowed where in the stadium the week before the match,"

"And, when we finally thought all was well, the Master of Ceremonies wanted to rehearse the choreography on the pitch, leaving the grass all squashed!" Uwe said with a somewhat forced smile.

Despite all these obstacles, the temperamental weather conditions and the heavy fixture schedule, Uwe and his team provided a pitch in perfect condition for the final.

And, if you think that the Allianz Arena groundcare team were able to begin their end of season renovations immediately after the final, the powers that be had arranged a charity game, four days later, between Bayern Munich and the Netherlands! Needless to say, the pitch played perfectly.

"Now we are looking forward to seeing what pitch quality our English friends can provide at the 2013 Champions League Final at Wembley!" joked Uwe. Now, there's a challenge!