0 The Anatomy of a Golf Course: TEES 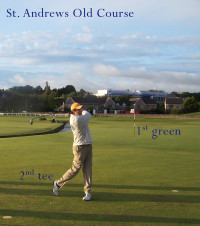 When the game of golf was first developed, the green for the previous hole was used as the teeing ground for the next, creating a continuous journey across the links land.

The first recorded rule book for golf, created for the Annual Challenge for the Edinburgh Silver Club in 1744, stated that balls must be teed up "within a club's length of the hole."

As the game was formalised, and rules altered, the teeing ground gradually moved away from the previous hole to form a separate entity within the anatomy of a golf course.

Initially, they were merely placed on the edge of the green. This history continues to be demonstrated on some older courses. For example, the St Andrews Old Course still has teeing grounds in close proximity to the previous greens (see figure 1). These original tees were purely functional boxes which were relatively flat in nature. The early golf course architects, such as Old Tom Morris, would use areas adjacent to the playing surface and flatten them, moving as little earth as possible, purely to create a level ground in order to begin playing the next hole.

In the modern game a combination of safety guidelines, and a continued need to elasticise the course to challenge players of all abilities, has determined the position of modern teeing grounds. The European Institute of Golf Course Architects has published a set of guidelines which states that teeing grounds should be at least 60m away from the previous hole's green or

centreline, with a preferred distance of over 100m, in order to adequately protect the golfer from balls being hit from other golf holes. The evolution of tees on to separate grounds, depending on the ability of the golfer, has also meant that some teeing grounds can be separated to cover up to, and sometimes more than, 100 yards from the hole.

The need to respond to technology is common in all aspects of golf design. The constant strive for length in every golfer's game, helped by the technological advancements made by club manufacturers, tests the golf course architect to react by placing different sets of tees that will match up with the range of abilities likely to play the course.

A championship layout, for example, may require up to five or six different sets of tees to cope with all types of player, from the professional golfer in competition playing from the back tees, through the society day playing from the daily or middle tees, to a beginner's on-course lesson playing from the front set of tees. A good design will test all of those golfers equally, and figure 2 shows, in very simple terms, how these challenges can be replicated.

The alignment of the golf tee is also an important factor. Each teeing ground should be aligned with the centreline 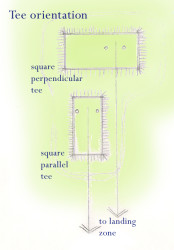 of the hole or, on a dog-legged hole, the tees should line up with the perceived landing zone for the average player from each tee box. The teeing area should give a clear guide as to the direction of the hole. Depending on the shape of the teeing area, it should either run lengthways towards the landing zone or perpendicular to the line of the hole (see figure 3).

The impact of technology has extended to the equipment available to the greenkeeper, and the need to shape tees so they can be easily mown. For example, more recently, tee squares have developed rounded edges to make them easier to maintain using sit on mowers (see figure 4). Amoeba forms have also been created in some cases, arguably more organic shapes which can fit into 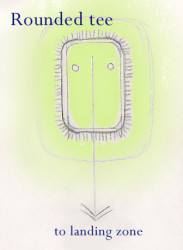 their surroundings more naturally than a box shape, although they should maintain some reference to the direction of the hole, in order to help with alignment (see figure 5). This is a matter of preference per architect, and both styles of tee can look appealing within a golfing landscape.

Tees need to be a substantial size, large enough to accommodate the golfer and their playing partners, and they need to have enough space available for alternative teeing positions in order to spread the wear of the ground from day to day, leaving other areas to recover.

Synthetic turf is often considered as an alternative to a grass tee in areas where it is less possible to successfully keep a good sward of turf. Driving ranges and pitch and putt courses for example, often use synthetic turf in order to cope with the high number of damaging golf shots played from a relatively small surface area. Synthetic turf is also used for winter tees, in order to protect the wear of a turf tee which cannot successfully re-establish in the winter months when turf tees would be largely dormant. 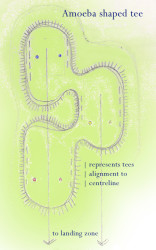 Synthetic turfs are also becoming a more viable option for tees which exist in poorer positions. A typical example of this would be a tee on the edge of, or within a woodland setting, where tree canopies and under-storey plants slow down the rate of exposure to light and air flow that the grass sward would require for successful growth.

Flat ground is specified for a golf tee, although each tee should actually be on the slightest of slopes at around 1 in 100 in order to create an area where turf will successfully grow without becoming flooded or keeping puddles. The slope should follow the run of general ground water flow. Tees on very flat ground can often be raised to help protect against them being flooded, and also to aid the golfer's view of the hole laid out in front of them.

Where tees are placed in the side of a hill and cannot, therefore, be raised away from the general flow of water, a mound can be added on the high side of the teeing area to deflect surface water run-off around the edges of the tee.

Drainage is especially necessary when considering a site on sloping ground, where it is not possible to raise up the tee from the surrounding landscape, or place a deflecting mound on the high side of the tee. A gravel catch drain, with a perforated pipe to an outfall in the base, can be placed between the tee and the slope as an exit route for water in heavy downpours, and act as a barrier to keep the tee from excessively flooding.

To improve the aesthetics in this situation, it may also be possible to cut the drain slightly further up the hill to take it out of view of the golfer.

This article has discussed all the elements that Andy Watson considers when designing a new tee, or re-designing an existing tee. In future episodes of the Anatomy of a Golf Course, Andy will look to give some insight into greens, bunkers, and everything in between.