0 The Appliance of Science

Not all nematodes are bad nematodes! Historically, nematode has been a bad word in the turf industry, but that is about to change, according to
Dr Andrew Brown of Becker Underwood 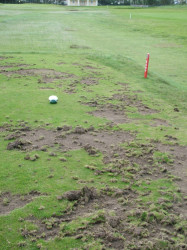 Nematodes are microscopic round worms; they can be found throughout the world in virtually every environment on Earth. Scientists have so far identified around 80,000 species of nematodes and estimate there to be somewhere in the region of 500,000 different nematode species. It has been said that if everything on the planet was removed you would be left with a perfect outline of everything made solely from nematodes, there are that many of them.

From this group of animals, the vast majority are harmless, feeding on bacteria within the soil. A small percentage are plant parasitic (e.g. Meloidogyne) or insect parasitic (e.g. Heterorhabditis). Historically, nematodes have been considered bad news due to the devastation on managed turf caused by species like Meloidogyne.

In the early 1980s Becker Underwood (formally known as MicroBio Limited) first developed the production and application of beneficial nematodes as part of research collaboration with HRI (Horticultural Research Institute). From 1989 to present day, significant investments were made to establish the world's largest beneficial nematode production facility.

This state of the art facility, based in Littlehampton, West Sussex, produces nine different species of nematodes from a range of dedicated stainless steel fermentation vessels. Back in 1989, initial sales were made to the protected horticulture industry in the Netherlands and UK, providing solutions for sciarid and vine weevil pest control. In subsequent years, sales have expanded throughout Europe, North America, Japan and New Zealand. Becker Underwood's nematodes are now used in a diverse range of applications in horticulture (both protected and outdoor), mushrooms, top fruit, home and garden and turf.

In many instances nematodes have become the standard for pest control. For example, plant propagators and mushroom growers experiencing problems with fungus gnats widely use nematodes (Nemasys) in preference to chemical alternatives. In other situations, for example vine weevil in strawberries and slugs in vegetable crops, nematodes (Nemasys L and Nemaslug respectively) are used for their strong efficacy and non-residue characteristics. 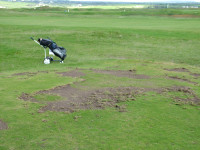 Once they have found a grub they enter the insect via its natural openings or break in through its skin. When inside the insect the nematodes release symbiotic bacteria it has been carrying around inside of it. The insect dies from bacterial infection 24-48 hours later.

The species of bacteria carried around by the nematodes is specific to the nematode species; they are unable to survive without each other. The bacteria which lives with Heterorhabditis megidis is red in colour which gives the product a red tinge. It is also the red bacteria which give the grubs a distinctive colour once they have been killed, if you find them before they decompose.

• Proven control
• No restrictions, no re entry interval
• Natural product, safe to applicators, turf users and the environment
• Non toxic, no requirement for protective clothing
• No concerns for residue run off
• Can be applied with standard spray equipment (nozzles >0.5 mm, filters removed)

The garden chafer (Phylopertha horticola) is the most common turf grub in the UK. It has a one-year life cycle with adults flying in May and laying eggs. Early instar grubs then feed on grassroots near to the surface until cooling soil temperatures make them move deeper into the soil in October.

Root feeding larval damage can be bad. Often large areas of turf can be rolled up like carpet due to the roots being severed by the feeding. However, secondary damage is often more devastating, with crows, badgers and foxes digging at the turf to feed on the grubs. Nemasys G should be applied between the end of July and the end of September, when soil temperatures are higher than 12°C. This allows the beneficial nematodes to target the small grubs when they are feeding near to the soil surface.

A number of factors have come together to open the market to using beneficial nematodes for turf pest control, such as an increased awareness of the risks of non-target effects on wildlife and turf users of the chemicals, as well as legislative restrictions.

An example is the withdrawal of the active ingredient Gamma-HCH (active ingredient in products such as Lindane and Gama-col Turf) that was removed from the UK market at the end of 1999. Merit™ is only available in granule form and can be difficult to apply evenly at the low application rate of 3g/m2.

Chemicals are also limited in their usage, for example Merit™ can only be applied once a year. There has also been a reduction in the cost differences between the few remaining chemicals and the previously too expensive beneficial nematodes.

Lahinch Golf Club is a beautiful seaside links course, located on the edge of the small seaside resort of Lahinch in County Clare, on the Atlantic coast of Ireland. Lahinch has two courses; the Old Course, sat alongside Liscannor Bay, and the Castle Course, which takes you around the ruins of the castle at the northern end of the grounds.

In autumn 2007 they experienced heavy infestations of chafer grubs (confirmed as Phyllopertha horticola by the STRI) on several fairways and large areas were dug up by crows and starlings. These areas of grass were returfed two years ago; most areas which were re-laid with this batch of turf had chafer problems. On the Old Course a number of fairways were affected, along with a number of tee boxes on the Castle Course. John Rouine, Superintendent at Lahinch, explained, "They have never been this big a problem before. You sometimes used to get small patches but never this scale."

Agronomist Colman Ryan of Cropcare explained that "in fifteen years of working on Irish golf courses I have never seen an infestation this bad. Chafers are not such a problem on the east coast - as they have colder winters and more frost." It could be possible that, with increasing global temperatures, the geographical range of these pests will increase, as has been seen with many agricultural pests.

Lahinch tried a number of cultural methods to reduce the visible damage, including bird control with weekly visits from a hawk, and also spraying garlic onto the grass to deter bird feeding. John Rouine explained, "The hawk works very well but we did not have great results with the garlic barrier."

Unfortunately, the hawk could not be on site permanently. Preventing the birds from feeding would not have solved the problem as, by not reducing the grub numbers, they would likely just return the following year in even higher numbers.

The groundstaff applied Nemasys G from one of their boom sprayers on a rainy day in September 2007. Because of the rain few golfers were on the course and, because there is no re-entry interval, those who had braved the weather did not have their round disturbed. The beneficial nematodes gave a very rapid knock down effect.

The product stopped chafer grubs feeding within three days of application, enabling the roots to start recovering. Grubs die within 10-14 days. Secondary damage also stops, as predators are no longer feeding off the grubs. Two weeks after application re-establishment work on the turf, such as re-seeding, could begin.

A follow up visit was made by myself and Colman Warde from Scotts four weeks after the application. The levels of grubs were dramatically lower and the grass was already showing signs of recovery. Karl Geary of Becker Underwood, along with Colman Warde, made a further visit in July 2008. The beneficial pest control programme accompanied by the turf management had made the previously damaged areas unrecognisable from ten months before.

On the July visit there was no evidence of secondary damage on the previously damaged fairways. Thanks to the efforts of the groundstaff and Course Superintendent, John Rouine, Lahinch Golf Club now has an integrated control programme to ensure this problem does not arise again. The product will be blanket sprayed over the whole course in early October to keep on top of this infestation and work on eliminating this pest for good.