1 The Art of Hole Changing 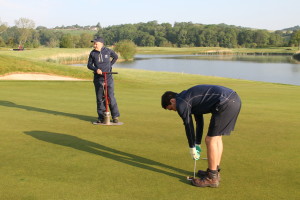 This is a subject that provokes a lot of debate, especially when the greenkeeper chooses a demanding hole position on the green which does not please everybody!

It is not until you look into the art of hole changing that you realise the amount of skill, knowledge and experience required to undertake this task.

Back in the 1970s, during my time working as a greenkeeper, I remember the difficulty we had choosing hole positions on our small soil pushed up greens, especially during the winter months when the greens were often waterlogged for long periods of time.

How times have changed? The demand for consistent firm, free draining, smooth playing surfaces has led to much improved maintenance regimes being implemented in terms of controlling thatch, improving surface drainage and sward density.

This has been achieved by increased frequencies of maintenance inputs in terms of aeration, top dressing, grooming, verticutting, feeding and mowing practices, coupled with greater investment in greens drainage systems on soil pushed up greens.

Another significant change has been the development of USGA greens and the fact that nearly all new golf courses are now constructed with these free draining surfaces.

Therefore, it is now a much easier task to find suitable hole positions, due to the excellent drainage capabilities of both USGA and soil pushed up greens.

The real starting point for hole changing must be the understanding of the rules of golf. The following information shown in italics has been in parts taken from The R&A Rules of Golf. 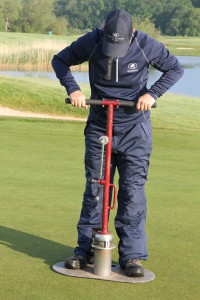 The greenkeeper should make sure that the Rules of Golf are observed, especially the requirements that the hole not exceed 4 1/4 inches (108mm) in outer diameter, must be at least 4 inches (101.6mm) deep and that, wherever possible, the hole-liner must be sunk at least one inch (25mm) below the putting green surface.

If a plastic cuff or rim is used, it is considered to be part of the hole-liner, so it too must be sunk at least one inch (25mm) below the putting green surface.

It is important that the greenkeeper has an understanding of the game of golf. Many greenkeepers also play the game in their spare time, this will undoubtedly help when choosing a new hole positions.

It is important that the greenkeepers study the design of the hole as the architect intended it to be played, know the length of the shot to the green and how it may be affected by the probable conditions for the day i.e. wind and other weather elements, conditions of the turf from which the shot will be played and holding quality of the green.

There must be enough putting green surface between the hole and the front and the sides of the green to accommodate the required shot. For example, if the hole requires a long iron or wood shot to the green, the hole should be located deeper in the green and further from its sides than should be the case if the hole requires a short pitch shot. In any case, it is recommended that, generally, the hole be located at least four paces from any edge of the green.

If a bunker is close to the edge, or if the ground slopes away from the edge, the distance should be greater, especially if the shot is more than a pitch. Consideration should be given to fair opportunity for recovery after a reasonably good shot that just misses the green.

An area two to three feet in radius around the hole should be as nearly level as possible and of uniform grade. In no case should holes be located in tricky places, or on sharp slopes where a ball can gather speed. A player above the hole should be able to stop the ball at the hole.
Consider the condition of nearby turf, especially taking care to avoid old hole plugs which have not completely healed. 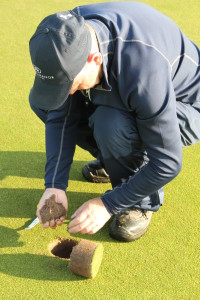 Holes should be cut as nearly on the vertical as possible, not plumb with the contour of the green.

There should be a balanced selection of hole locations for the entire course with respect to left, right, central, front and back positions. For example, avoid too many left positions with resulting premium on drawn or hooked shots.

An old concept of making the course progressively harder round after round is fallacious. One form of balanced daily treatment is to select six quite difficult hole locations, six which are moderately difficult and six which are relatively easy.

During practice days before a competition, locate holes in areas not to be used during the competition and which will not result in areas to be used being impaired by foot traffic.

Anticipate the players' traffic patterns. Locate holes for early rounds so that good hole locations for later rounds will not be spoiled by players leaving the green.

Many factors affect the selection of good hole positions, but the primary objective is to reward a good shot.

In practice, most head greenkeepers will know their greens really well, having spent many years maintaining them and introducing enhanced cultural practices to improve playability.

Having taken account of the rules of golf, the greenkeeper will then be faced with plenty more decisions and factors that will eventually influence the position of a new hole. 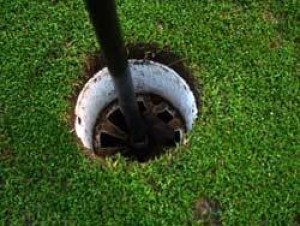 In no particular order these are some factors that may well dictate the position of a new hole:- green design, green size, topography, type of green (soil or USGA), condition of green, sward composition and input of maintenance regimes, weather conditions, players ability and the type and level of competition and player expectations.

As mentioned earlier, the course layout/design will vary depending on who the course architect was and when the course was built, back in the early boom of golf course building during the late 1890's to 1930's when Messrs Henry (Harry) Colt and Alister Mackenzie were in their prime. Course building was governed by the construction techniques of their day, so most greens where soil pushed up with no drainage, relying on the porosity of the local soil type and often perched on raised land with slopes.

It was not until the late 1960's that we saw a dramatic change in golf course design, brought about by the introduction of sand ameliorated/ sand based (USGA) greens, and the fact that golf was becoming more popular, creating a demand for many new golf courses.

This, along with better golf club technology, created the need for larger, more demanding golf courses, seeing longer courses, larger greens and increased use of bunker hazards being incorporated into the new designs.

Size, topography and construction type all have a bearing on the physical aspects of the green and will influence what hole positions are available at given times of the year. 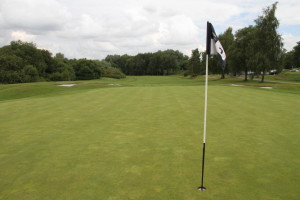 Condition and speed of the green also have a major bearing on hole placements. Speeds can range between 8.5ft and 12ft on a stimpmeter, and firm greens will perform differently to moist greens.

Weather conditions can change dramatically. Windy, open sites will influence play and often dictate the way a hole has to be played; hole location is crucial on these type of courses.

It is worth mentioning another important factor - and that is the actual cutting and presentation of the hole. This is usually determined by the choice of hole cutter used and the skill of the greenkeeper when undertaking this operation.

There are numerous hole cutting devices on the market, designed to make the job easier and quicker, together with other auxiliary items such as protection mats, cup cleaners, curved scissors and levelling devices to help present the perfect hole.

Having taken all of the above into account, it is easy to see why the art of hole changing is a topic of much debate in the clubhouse. It is one more facet of this interesting and, at times, complicated game called golf, in which opinions do invariably vary.