On a recent visit to Gloucester I got lost, not for the first time I hasten to add. I was on my way to meet up with Gareth Balmer at Gloucester Rugby. 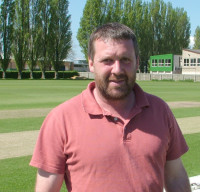 I pulled in at a school to get directions and, fortunately, the Head Groundsman was working by the entrance and he very kindly put me right.

Not wanting to miss an opportunity to talk to someone, I asked him some questions about his role at the school, Kings in Gloucester. He told me his name and, by coincidence, he turned out to be the uncle of Gareth, the man I was going to see. He was Graeme Balmer and not only was his father formerly the Head Groundsman at the school but Gareth's father, Dave (Graeme's older brother), had also been Head Groundsman at the rugby stadium. Confused? So was I.

Both the school and the rugby club have had sons following fathers into the position of Head Groundsman. In total Graeme and his dad have had 50 years at the school while Dave and Gareth have clocked up 14 years service at the rugby club. The family connections works very well as the two venues share machinery when required.

Faced with this unusual scenario I could not refrain from conducting an interview with Graeme about his role at the school. The King's School is one of the seven famous Cathedral Schools established by Henry VIII in 1541. Whilst initially a Choir School, it has grown considerably over the years into the leading co-educational independent school in the area, with around five hundred pupils, aged three to eighteen.

Graeme is responsible for maintaining the grounds and gardens at both the school site and the Archdeacon playing fields. He has two assistants, Dave Barley and Richard Bowman.

The Archdeacon playing fields host both rugby and cricket fixtures. There are three cricket squares at the ground offering around 40 pitches for play. However, with cricket being played every day during the summer term, the groundstsaff have to make each strip last as long as they can. Surrey Gostd loam is used on the squares and this has been very successful for repairs and establishing grass.

It is an old landfill site which does come with a few problems. Often, areas have been known to drop as much as 75 mm (3") in places, requiring cricket pitches to be re-laid every now and again.

Eventually I arrived at the rugby club to be met by Gareth and his father, Dave, the Stadium Manager. They were busy preparing the pitch for a televised match against London Wasps. Sky TV were setting up lighting, camera rigs and studio facilities. Gareth was mowing the pitch using a Jacobsen T-plex 185d triple set at 35 mm, getting ahead of the company who were marking out a Guinness logo. Despite having staged over thirty matches to date, and the prolonged cold, wintry weather, the pitch was still in very good condition with over 70% grass cover.

The weekly routine consists of pitch repairs after the game, divoting, re-levelling, mowing/striping up, aerating and marking out ready for the next game. Mowing (two directions) using the triple takes about two hours; marking out about one hour.

Gareth took over from his dad, when he (Dave) was made up to Stadium Manager in 2002. Dave had been the HG since 1996. They still share many of the hands on maintenance tasks. Dave makes a point of still doing the line marking, using a wheel-to-wheel transfer line marker. They did have a demonstration of Fleet's new laser guided Beamrider and thought it was fantastic, however the cost proved to be beyond their budget at the moment.

The height of cut remains at 35mm during the playing season and comes down to 25mm for the summer closed down period. This year's renovation programme will see the pitch vertdrained to around 200mm and scarified to open up and thin out the sward, followed by some spoon aeration down to a depth of 75mm.

The pitch will then be brushed and cleared of any debris and then top dressed with 40 tonnes of 70/30 dressing and oversown with 16 bags of MM60 grass seed. A pre seeding NPK 15 5 20 fertiliser will be applied followed by some Headland slow release products which will feed the pitch well into December.

Just prior to the new rugby season starting in September Gareth will again aerate the pitch, this time using the Earthquake linear aerator set at 200 mm centres, and topdress with another 40 tonnes of 70/30. The pitch has remained fairly unchanged since it was constructed in 1891. Being soil based it has had its fair share of drainage problems in the past, however a recent programme of localised drainage works has improved matters.

The club uses additional facilities at Hartpury college where there are natural and artificial grass pitches to use.

Dave does not have an unlimited budget for the pitch and has to ensure he gets value for money when buying and procuring services. However, with such a long history of Groundmanship in his family, he is not short of a few contacts to help him achieve his aims.

The stadium has a crowd capacity of 12,500. To ensure the club can be viable and move forward like other Premiership clubs its future will depend on how it can develop. There are plans to build a new 20,000 seater stadium. If that happens both Dave and Gareth will relish the opportunity of being able to influence what facilities should be at the new ground. Pop up watering, pitch covers, easy access and storage facilities are some items that can be improved upon.

Father and son are clearly very committed to the club, they travel to all the away games, where they have the chance to meet up with many of their fellow Groundsmen. The opportunity to talk shop and share ideas on how to raise standards is too good to miss.

Graeme, his father, his brother Dave and nephew Gareth are great ambassadors for our industry. Their total involvement as a family represents well over 65 years, a commitment which should be applauded and recognised. There is no doubt, from my conversations with them, that they have every intention of ensuring the Balmer dynasty in Gloucestershire continues for many more years to come.