0 The Battle of Bagworth field Bagworth village sits in the Leicestershire district of Hinckley and Bosworth, the village was once home to one of the most productive coal mines in the UK.

The National Coal Board closed the mine in 1991 and, since then the site, and surrounding industries that supported the mine, have been redeveloped with large housing estates.

There has been very little development in village resources and facilities up until now, with a local developer providing a new shop for the villagers, as part of a wider residential construction project. However, little remains for the growing number of children and teenagers to become involved with, without having to travel to local towns such as Coalville and Hinckley.

David Parry is a local resident in the village, and has made a proposal to the Parish Council to get the village playing fields back into use to give the youngsters something to do and somewhere to go.

With the closure of the mine in 1991, the playing fields became the responsibility of the Parish Council.

During the 90s, the playing fields were well used and were home to various football and cricket teams, however, over the years the pavilion fell into disrepair, only to be condemned as unsafe in approximately 2009. The pavilion was burnt down in the summer of 2013, sealing the future of the ground.

Since then, the Parish Council has maintained the grass with a twice monthly rough cut, which has allowed the once flat playing surface to become thick with annual meadow grass and weeds. The dugout to the main pitch has also fallen into disrepair in a similar way that the pavilion did, with a sagging roof and cracked block work. The last team to play on the football fields was Thornton Saint Peters.

It is clear that there is a need within the village for improved facilities, and David is determined to make the facility usable again. There are grants available from organisations such as Sport England, The National Lottery and Leicestershire and Rutland Playing Fields Association for improvements to the pitches and facilities, however the village have to prove that the facility is used and that there is a demand for their use.

With this in mind, the Parish Council have released a small fund of money to allow David to improve the surface to two pitch areas, with a view to him proving the demand and requirement for the playing fields. There is already interest from local football clubs, with Thornton St Peters wishing to return to their home ground, as well as an Under 12s team and a local girls football club wanting to use the playing fields.

Unfortunately, the fund set aside by the council will not cover the cost of the work required to make the pitch surfaces usable again and the cost of the ongoing maintenance required for the forthcoming season. 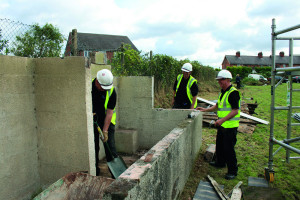 The works required to get the pitches into play are:-

Contractor, Interserve, got to hear of this project through local supplier MatchFit Sports Turf and DSFC Groundsman Martin Jordan, who is a resident in Bagworth.

Having spoken to David and a representative from the Parish Council, it was proposed that members of the Interserve Facilities Management Team at Defence Sixth Form College give a day of their time, under the Interserve Employee Foundation Initiative, to undertake the initial work required, making the facility playable. 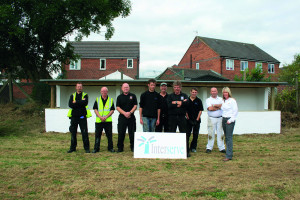 A few of the team members have also volunteered time in the run up to the event to start to make preparations for reducing the grass height to a playable length.

It was proposed that, utilising the specialist grounds maintenance equipment already owned by Interserve at the College and the skill sets of employees from the DSFC Contract, the work is undertaken to repair the dugout and make the pitch surface playable again.

The team have already canvassed the opinion of suppliers who are also willing to donate equipment and materials to support the work.

By undertaking this work, it will allow David and the Parish Council to then spend their limited budget on maintaining the facility over the coming year. It is then hoped that the project will become eligible for funding and grants from other initiatives to allow the scheme to continue, eventually rebuilding the pavilion and providing a much needed asset for the Bagworth community.