0 The Battle of Waterloo 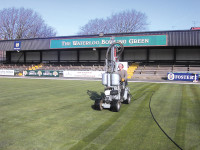 This summer sees Blackpool's "Wembley" of Crown Green Bowls, host its one hundredth Waterloo Championship, at a time when the club is fighting to restore the venue to its former glory.

The Waterloo Bowling Club, just yards from Blackpool's Pleasure beach and situated behind The Waterloo Hotel, has never been short of players. The green, constructed in the 1880s, is booked for every weekend from May to September.

The Waterloo Championship, arguably the main Crown Green tournament in the country, attracts over 1,000 entrants and is covered by Sky Sports.

However, the club has suffered from the lack of investment, and when former leaseholders of both the bowls club and the hotel, London and Edinburgh Inns, went into administration last September,Waterloo faced an uncertain future.

At this point, the club's Bowls Manager, Jim Parker who has played crown bowls since he was 15 years old, been manager of the Cheshire County
Bowling Association, Secretary of Manchester's Premier League and, if that wasn't enough, also looks after the green, got together with the landlord of The Waterloo Hotel, John Horne, and they decided to buy the lease.

From that moment the renovation battle began."We started a Fighting Fund, managed by four or five trustees who are respected within the bowling fraternity, to improve the stadium and our general facilities" says Jim. "But the green is our most important investment. Without the green we haven't got anything."

Jim felt there was a problem with the way the green was draining and called in Terrain Aeration in the middle of March.

Managing Director, David Green, arrived with Steve Oates and the company's Airforce Scamper terralift machine to find localised areas of surface water and the smell of anaerobic conditions further down. "The actual stratigraphy of the green is unknown," said David "but it has a clay base, little thatch and a sandy, gritty top layer probably produced by years of careful top dressing.

We could see that the green had been verti-drained regularly with small to medium sets of tines to a depth of 6 to 8 inches, as the holes were still open. In some places there was a layer of smelly, black slime within reach of my index finger, about 4 inches from the surface and, as we treated the green, several geysers of evil smelling, blue/black water erupted from previous probe holes!"

The company treated the whole green,inserting the probe one metre down and injecting air at 15 bar, to produce underground fractures and fissures.

Dried, milled seaweed, which swells when wet and keeps the air channels open, was inserted on the final blast. "We hardly needed to use the hydraulic hammer at all" said David. "As the probe holes were back filled with Lytag we heard a distinct 'plop', which indicated water about 18 inches from the surface."

The green is shaded by the hotel and being only 200 yards from the seafront,harbours dew, especially in the shady areas. "The day we were there, the dew was still on the grass at lunchtime" said David. "Given these factors, which are ideal for encouraging disease, surprisingly the green had very little.
There were just a few small patches of fusarium and some powdery black mould.

We took the precaution of treating these areas last to minimise the chances of spreading the problem by our machine tyres or our own feet. By the time we left the site there was already an improvement in the firmness of the turf and water was no longer being squeezed out by the passage of our machine."

One week later Jim Parker agreed. "It does feel a hell of lot firmer under foot and there has been no damage to the surface. Now that I own 50% of the lease, if I want something done and we've got the money, I'll do it."

The Waterloo Championship starts in July with the final on 19th Sept.