1 The Bees are Buzzing about Barenbrug grass seed!

The League One club, based in West London, had been using the specialist grass seed breeder's popular BAR 7 sports perennial ryegrass mixture at its training ground for two years to great success.

But the main stadium pitch at Griffin Park was not faring so well. And so, following the first game of the new season in August last year, head groundsman Nick Baldwin and club management decided to make a brave move. In consultation with Barenbrug's Neil Pettican and Roger Clark from distributor Collier Turf Care, Nick performed "major surgery" on the pitch mid-season - just two weeks before the next home game.

Nick takes up the story: "The pitch was in a sad state that day. It was 65 percent annual meadowgrass, the root growth just pulled away, and we had compaction and anaerobic problems underneath. Neil and Roger recommended we try BAR 50 SOS and, based on the success we'd had using BAR 7, we performed what was basically an annual renovation programme in the middle of the season."

True to form, Barenbrug's BAR 50 SOS provided the rapid turf repair Nick needed, establishing in just five days. The overseeding saw the club through the season, and subsequent overseeds in December and March, together with other pitch improvements, has seen the Griffin Park playing surface go from strength to strength. 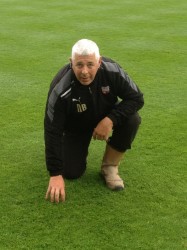 "The pitch looks amazing now," Nick comments. "The BAR 50 SOS has provided the durability and coverage we needed, and it just keeps getting better. We now have 100mm in root development that we didn't have before. We've had so many positive comments - at a recent game people even thought we'd re-laid the pitch it looks so good! I'll definitely stick with Barenbrug because the products are the best I've ever used - I'm hoping to try the new BAR 7 RPR next to bring further improvements. I'm just so grateful to the club for their support."

Barenbrug is the UK's leading grass seed breeder and has been breeding grass varieties and producing mixtures for professional golf, sports and amenity users for over 100 years. It counts the likes of St Andrews Golf Links and Premier League football clubs including Manchester City among its myriad high-profile customers.

A comprehensive trials, research and development programme - both in the UK and as part of the Royal Barenbrug Group's global programme - is what makes Barenbrug different. From initial pot trials and testing at the company's Cropvale UK research site, to field testing at customer venues the length and breadth of the country, no other grass seed breeder boasts such a rigorous and wide-reaching research and development programme.

The result is mixtures tailored to specific applications, and regional conditions and climates. The company also aims to produce all its grass seed to the Higher Voluntary Standards (HVS), which is unique to the UK and guarantees a higher level of purity than EU standards. Couple this with expert technical support and hands-on advice, and it's no wonder Barenbrug is the grass seed of choice among turf professionals.