by Louise Prettyman
in Machinery & Mechanics
on 10 Nov 2014

0 The benefits of pedestrian mowing over winter 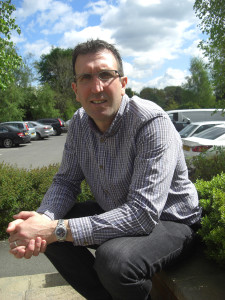 Recent weather trends, be it climate change or not, have resulted in the blending of seasons diluting the severity, or advantage, of any one over another. This has meant that an increasing amount of golf is now being played outside of the 'normal' months - good news for the clubs as this once seasonal sport now produces a healthy revenue over the winter. This however brings increased pressure for Greenkeepers to ensure the playing surfaces are in optimum conditions all year round. John Coleman, MD of Advanced Turf Technology explores the issue of winter mowing and offers a few tips.

As winter bites and temperatures drop it is common to find maintenance moves away from grass cutting and over to other activities such as leaf clearing and woodland maintenance. During the relatively dormant months, the greens will still require mowing, albeit on a less regular basis. As the grass is less able to combat wear, and will take longer to recover from any manipulation, it is beneficial to look for ways of reducing the stress whilst still maintaining the required mowing style; this is where a pedestrian unit - such as the ATT INFiNiSystem™ fitted with the SMARTCut™ cassette - comes into play. Hand cutting, as opposed to triplex mowing, reduces the lateral movement on the softer turf. It also provides the operator with much more discretion, making it possible to identify the areas of turf that are weaker and 'lift back' on the unit to avoid any unnecessary stress. The other simple way of reducing stress is to increase the height of cut.

Even during the normal growing season there is a strong case for mowing the 'clean-up cut' with a floating head walk behind mower and slightly lifting the height of cut to reduce stress in this area. It is no coincidence that quite often the origin of disease affected greens begins on the clean-up cut where stress on the plant is much higher. The cost of moving over to a pedestrian mower for the 'clean-up cut' may be slightly more expensive than mowing with a triplex, but quite quickly it could be seen as a major cost saving initiative if the cost of chemicals are factored in.

The simplicity with which both the cassette carrier chassis of the ATT INFiNiSystem™ and the SMARTCut™ cassette can be adjusted permits alteration of the behind centre distance and the attitude angle of the bedknife. 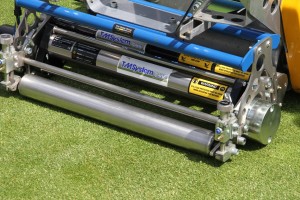 The eccentric on the bottom block, which holds the bedknife, allows a more aggressive or less aggressive position at point of cut. Moving the bedknife eccentric to allow the bedknife to come forward to a less aggressive position will also benefit the grass through periods of stress. The SMARTCut™ Cassette offers unrivalled versatility and ease of maintenance with 7, 11 & 14 blade options available to give a cutting height range of 1.6mm to in excess of 30mm (0.06in to 1.2 in).

Rolling could also be employed more frequently in place of cutting and is a clever method of preparing surfaces, making them acceptable for play whilst limiting the stress on the slow growing plant. Vibratory rolling, such as with the SMARTVibe™ cassette, is an excellent solution as there is less chance of compaction compared to the use of a brute -force hefty roller alone. With soil based greens in particular, it is vital to ensure the rootzone is not too wet when rolling as the soil particles will slide easier over one another therefore leading to compaction. The INFiNiSystem™ fitted with the SMARTVibe™ is the preferred option for rolling greens during the winter months for the reasons referred to earlier.