0 The "Best Turf in the World" for Trump Course

"I'd like the best turf in the world delivered to my new golf course"
Donald J. Trump, Trump International

In April last year, Tim Fell, managing director of turf producer, Tillers Turf, was having a fairly routine day at his Lincolnshire turf nursery until Donald Trump called from his office in New York to make his rather substantial request.

Donald Trump's vision is to create one of the finest links courses in the world at Balmedie, just north of Aberdeen. The Trump Organisation had identified Tillers Turf as the specialist grower of turf for golf courses, having supplied turf for greens at prestigious courses throughout Europe, and most recently to the renovated West Course at The Wentworth Club.

"We were asked to submit proposals for growing the turf for the 5-star 18-hole golf resort development, Trump International Golf Links," Tim Fell explains. "The specification was for 40,000m² of a traditional Scottish Links fescue and browntop bent mixture, grown on a rootzone to match the indigenous dune sand. They also needed 25,000m² of our Arena Gold turf, which is hard wearing and fine in appearance, for use on pathways, and our 100% fescue turf for fairway repairs. An additional area, over and above the contracted amount, was produced as a contingency. In the event, this can now be offered to other customers for use on green construction, fairways and tees."

"The main challenge for us was to produce greens turf that was strong enough to lift and handle, without building up a thatch layer, but we have a very experienced team and we were confident that we could deliver turf that met the specification and the expectations of Mr. Trump."

Rootzone sand, in keeping with sand native to the Menie estate, was spread over the nursery at a depth of 15mm, and on the 17th and 18th June 2010, the traditional Scottish Links seed mixture was broadcast into the ground.

Temperatures were well into the high 20s at this time, and the main challenge for Tillers' staff was to keep the sand damp to ensure quick, even germination. The company had invested in the purchase of a 45 metre wide Briggs boom irrigator specifically for the job, which provided controlled coverage with a small droplet size. Irrigation was then applied little and often.

Germination was observed at around ten days, and the plant reached first leaf stage at fourteen days.

One year on and it was in prime condition. Lifting began on 8th June, twelve months after sowing, and was completed by the end of August. To reduce the risk of heat damage, the turf was lifted in the early morning before the air temperature reached 15OC. "Harvesting wasn't possible on some days," explains Tim, "it was just too hot."

"The turf was lifted with a Trebro Harvestack, automatically loading twenty pallets with sixty four standard 0.6m-wide rolls of turf, 15mm thick. It's critical that the time between harvesting and laying is kept to an absolute minimum. The haulage was key in delivery of the contract; we put a lot of effort into getting the level of service required and coordinating the loads. The turf was lifted at 5.00am and loaded straight into lorries for the journey north, arriving in Aberdeen the same day."

"When we had high temperatures, we arranged for specialist refrigerated wagons to transport the day's load. We numbered each pallet to enable the contractor to lay the turf in the order in which it was harvested. By August, the handover of all the greens turf was complete, and we were satisfied that it was the best turf our company has ever grown."

Standing by to receive the turf at the end of its journey north was John Bambury from Create Turfgrass. Having been appointed in April, he moved swiftly to put plans in place to enable the project to run smoothly. The scale of the site is colossal. The vast estate, with its towering dunes, covers 1,800 acres, with 107 tee boxes and a 3,000 square metre putting green.

"It requires a different approach to course management - looking at the bigger picture," John explained. "You're planning, but allowing for flexibility and building in contingencies. The focus is to build structures so that a fully functional maintenance department is created. Elements such as budgets, equipment procurement and strategic plans have to take into account the immediate and long term needs of the project. You're also developing a new team, each with differing personalities and talents and, in addition, coordinating the logistics moving sixty or more skilled trades people around a site which doesn't yet have a road infrast 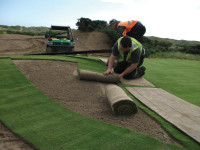 "Our priority was to put the resources in place to get the turf laid quickly. Sol Golf have been phenomenal in managing and delivering the construction of the course. One of their teams worked as a 'chaingang' to get the turf unloaded into a cool location and in-situ as soon as possible. The work was staggered so, whilst one load was being laid, another team was preparing to receive the next."

It was Mr. Trump's personal decision to turf the surrounds as well as the greens, and the contrast of the pure fescue on the tees and fairways, and the framing of the greens with the fescue/bentgrass surrounds looks truly stunning.

In addition to turfing the greens and surrounds, Tillers supplied its Arena Gold turf, a rye/fescue mix, for the footpaths, and straight fescue turf for repairing damage to the fairways caused by deer. 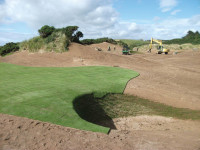 "I have had lots of people say that the footpaths are like carpet," adds John. "We've got irrigation running alongside them, so we've been able to keep the turf in great condition."

Once the turf was in place, an intensive management regime kicked in, combining nutrition, topdressing, disease prevention and irrigation, supplied by 64,000 linear metre of irrigation pipe and managed with pinpoint accuracy from the greenkeeping team's iPhones.

"It's the first time I've worked with Tillers Turf but I was incredibly impressed. Trump golf courses are known for perfection, that's what they delivered. It was Poa-free and not a single roll was rejected - that's some achievement."