0 The Bylet - a bowls club in the middle of the River Severn! 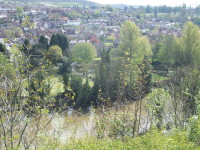 The game of bowls came to The Bylet in 1884, replacing a lawn tennis club that had been the original occupier of the island. The club was established by a number of wealthy merchants and business people, who had to access the island by boat and, in the absence of any clubhouse, relied on sustenance supplied by a local hostelry.

On an April Sunday morning, I met up with club secretary Tom McGill and treasurer Peter Driver to find out all about this unique venue and the issues it faces. Also present was Kevin Moult of K M Turfcare Management, who has been employed by the club as an adviser and contractor to support the committee's efforts where maintenance of their two greens is concerned.

Market Drayton based Kevin, who has been trading for seven years as an adviser and greenkeeper, was in the process of setting up when I arrived, and I had the opportunity to chat with him in connection with the work he does. The Bylet's particular issues and the current state of bowls generally. "In my opinion, a big contributory factor towards the decline in bowls clubs is that, generally across the country, it is too cheap to play the game," says Kevin. "All you need is a set of woods and around £60 to join a club, and away you go. The problem is that this low revenue generation, together with increasing costs, means some simply can't survive. I travel all over Shropshire, Cheshire, Mid Wales and the West Midlands carrying out regular maintenance programmes, and have seen the effects of cutting back on specialist greens maintenance, contractors and the necessary equipment and materials, which then results in inferior surfaces, poor playability and a decline in membership numbers. It's a downward spiral."

With his rant over, Kevin goes on to explain that he is here today to apply a liquid feed and a wetting agent, a process he will repeat monthly throughout the season. "Soil temperature is critical and variation can cause problems. The warm spell we experienced in March resulted in a number of clubs getting ahead of themselves with scarification and aeration work." He makes the point by drawing my attention to areas on what is referred to as the 'top green', adjacent to the clubhouse, and so called as it sits a few feet-higher than the 'bottom green'. "Tining here was too deep and too early, which was compounded by an overly

aggressive application of fertiliser and a lack of rainfall, which has resulted in scorch marks in certain areas on both greens."

As Tom McGill explains, Kevin has been brought in as an adviser following the resignation of the club's greenkeeper. "We parted company last year, when he resigned following a disagreement with the committee. Basically, we felt the greens were carrying too much grass growth and, as a result, were playing too slow for top level bowling. We have held a number of prestigious tournaments here over the years, including the Ladies All England Championship in 2009, and are keen to continue to host such events. We now pay for the services of one of our member to cut the greens, but are aware that mistakes have been made in the past, which is why we employ Kevin to undertake the more specialist and critical maintenance work, along with his valuable back-up and advice."

"Our unique location does mean we are susceptible to the occasional flood, although the height of The Bylet, and the funnelling effect of the island's location give us some protection. Our most recent greens and clubhouse flooding was in 2000. The impact of any flood on our greens is usually minimal, the main issue being one of i

nconvenience in the form of a general clean-up involving jet washing walkways around the greens. The trees which surround us also act as a barrier, and also stop any undue amount of detritus being deposited on the playing surfaces. The greens themselves seem to cope very well with any resultant silt deposits, without suffering any ill effects."

In the winter of 2004-5, the Bailey bridge that provided access to the island, and which had previously been damaged by flood waters, was replaced by young Territorial Army volunteers. "This cost the club £10,000 for a secondhand replacement bridge, plus a £2,000 donation towards the TA Youth Fund. It was constructed to cope with up to twelve tonnes in weight and named the 'Terriers Bridge' as a thank you to the young TA team."

The new bridge really came into its own after the old clubhouse was destroyed by fire during a burglary in 2007. "It seems they weren't just content on removing the valuables, but also wanted to deprive us of our future enjoyment," bemoans Tom. "Delivery of

building materials for the new clubhouse simply wouldn't have been possible without the new bridge in place."

The new clubhouse was opened in July 2009 by Birmingham born, West Bromwich Albion fan and TV presenter. Adrian Chiles. It has its very own 'Baggies' supporters corner - possibly the attraction for Adrian Chiles - and was constructed one metre higher than its predecessor to give additional protection against potential flood damage.

"The burglary and fire were a critical time for the club, and it was heart-warming, at the time, to have so many people from both within and outside who were prepared to contribute and help us build a new clubhouse," enthuses Tom. "We had a number of members who, as trades people, supplied materials free of charge and worked on the project on a labour only basis. This, allied to a financial contribution from Bridgnorth Town Council, plus a number of fundraising events, contributed

towards our 'Phoenix Fund', enabled us to meet our financial target. The last £36,000 was raised from the members themselves, who contributed what they could afford. We are still paying them back, although the amount we owe is now down to around £18,000.

Returning to the maintenance of the two greens, Kevin explained that, for both greens, the plan involves a monthly application of liquid feed and a wetting agent to promote growth and coverage of any bare patches. "All greens need a combination of light and aeration and, although Bylet is an idyllic setting, the trees that surround the island do cause problems."

Peter Driver added; "the club have approached Shropshire Council and put the case for selective lopping, pruning and thinning, but progress has been slow. Certain trees have been earmarked for treatment, but the committee are currently involved in protracted 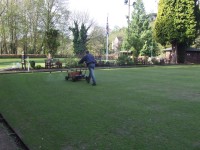 discussions with the council over such issues as habitat for nesting birds and bats. The bottom green, regarded by most who play for or against Bylet teams, as the more difficult green to master due to its contours, is slightly lower and does suffer more from a lack of light. A longer term issue for us, and one which may prove to have a bigger future impact, is that of river bank erosion, so we are also putting a strong case to the council to have a retaining wall, which protects one side of the island, extended further."

Kevin continued; "the plan, with the greens in the condition they are at the moment, is for as much sarrel spiking as possible. Brush reeling will be carried out twice a month until we start to get uniformity of grass. Then I will start to think about verticutting, which will be the plan all the way through the season until September, when I will review how things are progressing and what additional measures may be necessary through the off-season."

"The more aeration we can encourage the better. The club have a very effective Sisis Auto Rake Mk4 which gives a clean, consistent cut and maximum thatch removal. The plan is to diagonally nylon brush in both directions to stand up the sward and remove any accrued debris which can 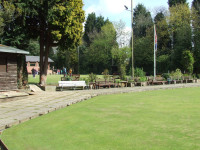 encourage thatch. This should be repeated every two weeks. We will also consider an application of ferrous sulphate for moss control."

For the regular 'through-the-season' cutting, the club use a Lloyds Paladin 22" mower, backed up by a Masport cylinder mower, and Keith's recommendation is that the cut height should be set at 5mm-6mm. Other tools in the club's shed include a dragbrush and switch cane.

"Where profile and funding is involved," continued Tom, "bowls is often the poor relation. The new bridge and clubhouse caused serious financial issues. Whilst we are not the cheapest club in the county, we do currently have a healthy membership close to two hundred, which means that our annual revenue is good through membership, bar takings and functions. We also have a high number of competition players, and we run sixteen teams across a number of different Shropshire county leagues and cup competitions. Encouragingly, we also have a good number of junior members whom, we hope, will help the club into the future." 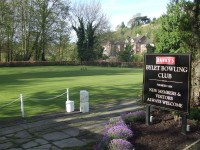 Following my time with Tom, Peter and Kevin, and having witnessed the enthusiasm and commitment of all concerned, I was left with a real feeling for the history of the place, and also the reassurance that the game of bowls - which has been played here for almost one hundred and thirty years - was in safe hands and would continue to thrive on the Bylet for many more.