1 The changing face of the golf club

"I couldn't quite understand the greens committee, the way they almost dictated work to our head greenkeeper of many years, a man who knew more about turf management than any of them, was baffling"

Forty years ago, after developing a great love for the game of golf, I decided to embark on a career change and become a greenkeeper. The thought of working in an industry where I spent most of my leisure time was very appealing and, luckily for me, a position at a locally well know members club became vacant.
My love for the game must have been a great attribute, I was appointed, the rest is history and I look back on those days with enormous affection.

My new employers were a club steeped in tradition and history, something that was very appealing to me. We had artisans who worked on the course part time and, as payment, they received a much-reduced membership and their very own clubhouse.

During that initial period, I soon became aware of the unique management structure within golf clubs, namely the various committees and their roles. Coming from a different industry I couldn't quite understand the greens committee, the way they almost dictated work to our head greenkeeper of many years, who knew more about turf management than any of them, was baffling. 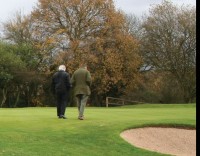 In my former industry, we all undertook training, and people accepted our advice and work as best practice and never questioned it, so you can imagine my surprise as doctors, solicitors etc. were telling a man with over twenty years experience how to do his job.

This said, the club were wonderful to work for; they had great integrity and valued employees enormously. Their encouragement as I set off for five years at college was wonderful, and letters of congratulations and small bonus payments came my way, as results were good. As I said before, happy days.

However, what was very evident as an industry was the need for a complete rethink on golf club management structures. Continuity was a buzzword and the need for clubs to be more professional in managing their themselves. The story of an incoming captain wanting a new bunker on 17, only to be filled in two years later by another incoming captain, was all too common, so change was afoot.

The EGU, along with a golf club in the south of England, drew up something called a course policy document, which laid down roles, responsibilities, course management practices in a workable document which was submitted and approved at AGMs. We also saw many clubs swing the axe on the old committee structure and implement a management board structure.

All of a sudden, our Head Greenkeeper, or Course Manager as he had become, would report to one man and was able to manage the course as he saw fit, within the outlines of the course policy document and budget. This was ground breaking and something the industry had wanted for years, but thought was beyond the realms of possibility.

That was then, so where are we now?

Not much has changed with the structures, but times are far removed from those happier days. Over the past few years we have seen an enormous change in the industry. Clubs have been influenced and affected by the economy, new golfers and new style club managers.

The economic crisis in the country has seriously reduced much needed revenue to clubs. Whether it is reduced membership numbers, as migratory members move from club to club as joining fees are abolished, reduced green fee numbers and reduced green fees in order to be more competitive, most have suffered.
The knock on effect to the greenkeeping team is to maintain or exceed current standards with less money, what an unenviable task!

Many years ago, the late and great Jim Arthur talked about new golfers expectations, and how right he was, but then Jim was right about so much, why should we be surprised? I recall how we all detested the added expectations that the Masters brought in April, but now we have that every week as satellite television beams tournament condition courses into our homes.

Also, the expectations have become demands and we now see enormous pressures bought onto the greenkeeping team, whether it be agronomic compromises over much needed maintenance work so as not to disturb surfaces, or the constant call for colour and speed.

We are still failing, as an industry, in getting the message across that the tournament courses that are seen week in and out on television are not achievable at the average golf club over any length of time. How we get this across is still a mystery. I bought a well know golf publication in April which had a 100 page special on the Masters, and not one page was dedicated to how the course is prepared for this week long event - there were six pages on horticulture though, what chance have we? New golfer demands, and doesn't care about the hows and whys!

That leaves us with the new club manager. Very different from the old secretaries, these are potentially a dangerous breed indeed. They are young and 'driven' and, on appointment, want to make a quick impact to justify their exorbitant salaries. Most of them play golf to a good standard which, of course, makes them 'experts' on managing golf courses. They have no qualms about telling a well-qualified and experienced head greenkeeper/course manager how to do his job.

We have seen and heard of some shocking cases where this has happened. You would imagine, as a new club manager, a massive part of your job is to build a rapport with all your line managers, but this is sadly not the case with some as their egos get in the way, they want to dictate and control everything!

If the course has a great reputation, then let the successful head greenkeeper/course manger do his job, do not try and influence and dictate to a man who clearly knows his job better than you.

Sadly, we have seen too many good men fall foul of this scenario, where they have failed to build a good working relationship with the man responsible for their prized asset and then, twelve months later their head greeenkeeper/ course manager has 'left'. It's such a shame when a well qualified and experienced professional head greenkeeper/course manager knows that, if he does not bow to the demands of his club manager, then the door is looming to hit him on the way out, and potentially a career down the pan.

Some question why industry associations are quite prepared to advertise positions, when they are all too aware that the previous incumbent has been hounded out. Good question indeed, but someone will always profit from the demise of another. Usually, the new incumbent is able to build a relationship with the club manager - or is he just more able to say 'yes'?

So, over the last forty years, I have seen enormous changes in our golf clubs; some good and some bad. There are still some very good clubs to work for, but there are, equally, some very bad ones. Perhaps this has always been the way?

Next time, I will look at the changing face of course management.